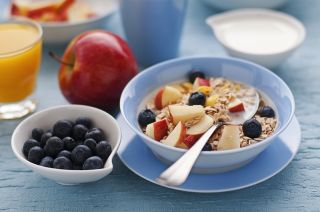 People who eat breakfast tend to have a lower risk of certain health conditions.
(Image: © Healthy breakfast photo via Shutterstock)

Are you tired of hearing about how breakfast is the most important meal of the day? Well, this advice probably not going to stop until more of us start eating our morning meals.

About 18 percent of males and 13 percent of females between the ages of 35 and 54 are breakfast skippers, according to a 2011 study by the market research company NPD group.

Here a look at some of the research showing the possible benefits of breakfast:

Diabetes: Skipping breakfast may increase a woman's diabetes risk, according to a study published this month in the American Journal of Clinical Nutrition. Women who ate breakfast an average of zero to six times per week were at a higher risk of developing type 2 diabetes than women who ate breakfast every day.  [9 Meal Schedules: When to Eat to Lose Weight]

Memory: A 2005 Journal of the American Dietetic Association review of 47 breakfast-related studies found that eating breakfast is likely to improve cognitive function related to memory and test grades. Translation: Eating breakfast is a smart move!

Weight Loss: In one recent study, people who ate breakfast as their largest meal lost an average of 17.8 pounds over three months. The other participants consumed the same number of total calories per day, but ate most of their calories at dinner, according to the study published in July in the journal Obesity. The large-dinner group only lost an average of 7.3 pounds each over the same time period.