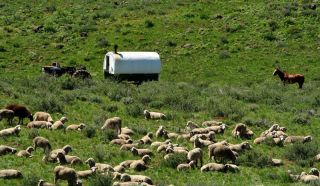 There's something rotten in Michigan — and the stench is coming from one rogue farm in the western portion of the Upper Peninsula. Based on state documents obtained through Michigan's Freedom of Information Act (FOIA), and an analysis of those documents conducted by the National WolfWatcher Coalition and Keep Michigan Wolves Protected, four-fifths of the livestock killed by wolves in the western management unit (96 animals out of 120) come from this one farm. The documents make plain that the owner of this farm is engaging in unsound, sloppy — and perhaps even criminally inhumane — practices.

The story told in the FOIA documents broke late last month in the Marquette Mining Journal and on Michigan Public Radio. Even though state law already allows the killing of individual wolves threatening livestock or pets, the state senator from this region has shepherded two bills through the Michigan legislature to allow trophy hunting of gray wolves — right after they were Gray Wolf May Lose Endangered Species Status . There are only about 650 wolves in the entire state, and that number is down from the wolf census two years ago.

There are only about 650 wolves in the entire state, and that number is down from the wolf census two years ago.

There were 11 farms that reported wolf problems in the western region of the Upper Peninsula, with most of them having only a single incident. In an investigation conducted this past winter, the Michigan Department of Natural Resources (DNR) found that the owner of that one farm, John Koski, did not live on the farm and did not provide proper care for his cattle, failing even to remove dead animals — allowing their carcasses to attract predators. The state provided three "guard" donkeys to him for free, yet DNR officials found two of them dead, and the third one was in poor condition. Koski also failed to use fencing as a protective mechanism, even though the state also provided that to him at no cost.

Koski was even paid for the livestock "losses" he sustained, pocketing $33,000 of the $40,000 paid out by the wildlife management unit.

It doesn't take too much deductive reasoning to figure out what's at work here: proponents of hunting and trapping wolves for trophies and for their pelts used Koski as a poster child for their hunt, citing enormous losses from wolves. What they didn't tell people was that the vast majority of all incidents involving wolves occurred on one farm, which was clearly exhibiting the worst management practices and inviting predators or other animals onto the farm by leaving rotting animal carcasses around. It essentially amounts to a wolf-baiting situation, and then crying crocodile tears when the wolves show up for a free meal.

The people who want to kill wolves don't want to admit that their agenda is driven by an irrational hatred and a lack of understanding of wolves. They try to dress up their policy goal of wolf-killing in socially beneficial terms. Specifically, they say the hunt will protect farmers.

The fact is, the state already allows the killing of problem wolves. And the state provides free tools to farmers having wolf conflicts and compensates them for the very infrequent losses that occur. Random killing of wolves in the forests and wilderness won't do a thing to further mitigate the remote likelihood of a wolf incident. Sound animal husbandry practices are the solution.

Wolves are an economic and ecological boon to the state, driving wildlife-oriented tourism and keeping prey populations in balance, thereby reducing crop losses and automobile collisions involving deer. That's why The HSUS urges all Michiganders to support two referenda — one to nullify the wolf trophy hunting season set to start in November, and the other to restore the rights of voters to have a say on wildlife management policies and deny the unelected political appointees at the Natural Resources Commission from having all authority to open new hunting and trapping seasons on protected species. To get involved, visit www.keepwolvesprotected.com.

Pacelle's most recent Op-Ed was "Sharks Gain Protections in India, Will U.S. Follow Suit?" This article was adapted from "'Crying Wolf and Pocketing the Cash," which first appeared as on the HSUS blog A Humane Nation. The views expressed are those of the author and do not necessarily reflect the views of the publisher. This version of the article was originally published on LiveScience.