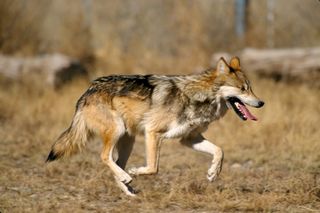 The iconic gray wolf — once hunted to near-extinction in the United States — may soon lose its endangered species protections.

The U.S. Fish and Wild Service on June 7 proposed to remove the wolf from the nation's list of threatened and endangered species, saying its numbers have bounced back to healthy population levels. There are at least 6,100 wolves across the Great Lakes and Western states, FWS officials said.

Under the proposal, state wildlife officials would be responsible for managing wolf populations within their borders.

Gray wolves were already delisted in the Western Great Lake states in 2011, which marked the first time Congress has ever stripped a species' federal protection. The predators also lost their endangered status in the Northern Rocky Mountains in 2012. Those moves allowed states such as Minnesota and Wyoming to authorize wolf hunts, drawing the ire of many conservationists.

The proposal, which will be subject to a 90-day public comment period, was met with criticism by some environmental groups, such as the Center for Biological Diversity, which noted, despite its recovery success, wolves occupy just 5 percent of their historic habitat in the country today.

"This is like kicking a patient out of the hospital when they're still attached to life support," said Noah Greenwald, endangered species director with the organization, said in a statement. "Wolves cling to a sliver of their historic habitat in the lower 48, and now the Obama administration wants to arbitrarily declare victory and move on."

FWS director Dan Ashe said an "exhaustive review" scientific and taxonomic review shows that the agency has accomplished its goal of addressing the threats the gray wolf faces to ensure its recovery. A small population of the highly endangered Mexican wolves in southern Arizona and New Mexico would keep their protections under the proposal.

Details on the proposal and the commenting process can found on the FWS's wolf information page: www.fws.gov/graywolfrecovery062013.html.