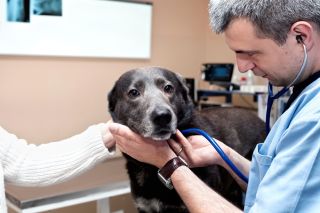 Several dogs in Ohio have been sickened, and four have died, from a disease that may be caused by a newly discovered virus. (This is not a photo of one of the sick dogs.)
(Image: © Ljiljana Jankovic | Shutterstock.com)

Veterinarians, health officials and dog owners are alarmed by the mysterious recent deaths of four dogs in Ohio. Some experts suspect the dogs may have died a few days after exposure to a virus that's normally found in pigs.

Three dogs in the Cincinnati area and a fourth dog near Akron died in August after exhibiting symptoms that included vomiting, bloody diarrhea, weight loss and lethargy, according to the Columbus Dispatch.

"We feel obligated to make sure pet owners are aware this is happening," Erica Hawkins, communications director for the Ohio Department of Agriculture, told the Dispatch. "Supportive therapies can be helpful if started early enough." [10 Deadly Diseases That Hopped Across Species]

The three dogs from Cincinnati died last month after staying in the same kennel. The Akron dog that died was one of several in the Akron-Canton area that showed the same symptoms. A stool sample from the Akron dog tested positive for canine circovirus, a recently isolated virus.

Circoviruses are spherical viruses (grouped within the family Circoviridae) that are commonly found in birds, according to the Centers for Disease Control and Prevention (CDC) publication Emerging Infectious Diseases. Until recently, the only mammals known to carry circoviruses were pigs.

But in 2012, a 1-year-old dog in California was brought to the University of California, Davis, Veterinary Medical Teaching Hospital after being kenneled for three weeks. The dog had bloody diarrhea and was vomiting; because of the poor prognosis, the dog was euthanized and its tissue was sampled to determine the cause of death.

The tissue analysis showed that the dog had a new type of circovirus named DogCV. "Our results indicate that circovirus, alone or in co-infection with other pathogens, might contribute to illness and death in dogs," the report stated. Not all infected dogs died, and the virus has been seen in dogs that appear healthy, indicating that some dogs may have an immunity to the virus.

Viruses and bacteria that commonly infect just one animal species can evolve and "jump" from that species to another; this process is known as zoonosis. Medical experts believe that influenza, HIV, Ebola and dozens of other zoonotic diseases once only infected pigs, apes or other animals, but these viruses are now common among humans.

Bats, in particular, are known as carriers of viral infections: Recent research suggests bats are reservoirs for more than 60 viruses that can also infect humans, and host more viruses per species than even rodents do.

The Ohio Department of Agriculture is continuing to investigate the death of the four dogs in the state. "The laboratory confirmation [of circovirus] is important because the virus is newly isolated, however we are not prepared at this time to confirm that canine circovirus is the cause of the dog illnesses," state veterinarian Dr. Tony Forshey said in a statement. "Because the symptoms being exhibited can also be linked to other known illnesses, additional analysis and information is needed to determine if this virus alone or in co-infection contributes to illness and death in dogs."

Dog owners are advised to take normal precautions with their pets such as watching for signs of any disease and to contact their vet if they notice any symptoms of illness. "The most important thing dog owners can do is call their veterinarian if they have concerns about the health of their pets," Forshey said. "Your veterinarian is the best person to help determine if your animal is ill and what steps should be taken to help them recover."