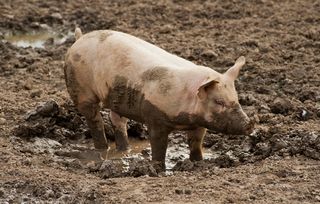 Some prize pigs at Ohio's county fairs may have a dark secret.

Two months ago, a 61-year-old Ohio woman died after catching a new strain of swine flu. Her death was the first fatality linked to a variant of influenza A virus H3N2 (H3N2v), which first appeared in humans in 2011 and has infected more than 300 people this year.

Like many individuals who caught H3N2v this summer, the woman who died had contact with pigs at a county fair, according to the Centers for Disease Control and Prevention (CDC). The flu-risk at livestock exhibitions might be especially high because the majority of flu-positive pigs at county fairs don't show any outward signs of illness, a new study suggests.

Researchers from Ohio State University tested 20 pigs at each of 53 county fairs during the summers of 2009, 2010 and 2011. They found at least one pig tested positive for flu at 12 of the fairs. Among those, 80 percent looked healthy. (The strains identified in the study include H1N2 and H3N2 viruses, which have been found in pigs since 1998.)

"This is an explanation of why people were becoming infected in 2012 — because a high percentage of infected pigs with no clinical symptoms are exhibited at fairs," Richard Slemons, an Ohio State professor of veterinary preventive medicine, said in a statement. "There is potentially high exposure."

Another researcher, Andrew Bowman, said it might not be surprising to find the viruses in pigs at county fairs, which are ripe grounds for transmission. [10 Deadly Diseases That Hopped Across Species]

"If you bring 200-plus pigs together from multiple locations and house them with new neighbors for a week in a new environment, they are all bound to share pathogens," Bowman explained in a statement. "But we were surprised to find as much flu as we did subclinically, when pigs weren't showing any signs of illness."

In another study, the researchers compared virus isolates collected from pigs at fairs during this past summer with human-origin influenza A virus isolates recovered from people who came down with the flu following exposure to pigs at an Ohio fair in July 2012. They found more than a 99 percent similarity in the genetic sequences of the virus isolates, confirming that the illnesses were the same.

The researchers are not sure whether the infections are only being transmitted in one direction, from pigs to humans. According to the CDC, the virus can spread to humans in the same way as human-to-human flus do, through droplets in the air. So if one were to touch something, like a pig, with the virus and then wipe your nose or mouth, there's a chance of transmission.

"It is possible that humans are infecting the pigs," Bowman said. "The lineage of the H3N2 strains we see in pigs can be tracked back to the human seasonal flu of the 1990s. Human-to-swine transmission of influenza viruses has the potential to significantly impact swine health."

Pigs' bodies are like melting pots for viruses. The more often flu viruses hop between hog hosts, the better their chances are of evolving into a strain that can affect humans, the researchers said.

"Pigs can be infected with human-, avian- and swine-origin influenza viruses, making it possible for these viruses to easily swap their genetic material, which could allow for a new strain to emerge," Bowman said. "The potential is there for newly emerged strains to be the next pandemic we never saw coming."

The researchers said shortening the pig exhibition period, vaccinating exhibition pigs and avoiding movement of hogs from one fair to the next could help prevent flu transmission. Additionally, the CDC recommends people with compromised immune systems should avoid pig displays at fairs.

And pigs are not alone in carrying the flu. Recent research suggests cats and dogs also get the flu more often than thought, and they can get it from their owners.