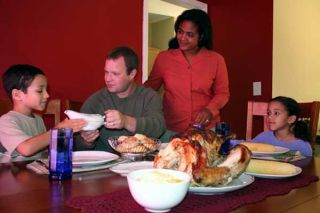 Doctors may have found a way to simultaneously work on several major health problems facing U.S. children: obesity, too much TV, too little sleep and chaotic mealtimes. Maybe you can guess where this one is going.

A team of researchers in the United States and Canada has developed an approach to help low-income children lose weight by reducing the kids' television viewing time, increasing their sleep time, and encouraging their families to eat dinner together at consistent times.

This is the first home-based intervention that has attempted to reduce obesity rates by changing household behavior, instead of focusing on diet or exercise, the researchers said. The study appears today (Sept. 9) in the journal JAMA Pediatrics. [10 Ways to Promote Kids' Healthy Eating Habits]

Childhood obesity has more than doubled, and tripled among adolescents, over the past 30 years, according to the Centers for Disease Control and Prevention. Approximately 17 percent of U.S. children are obese. The problem is particularly acute among African Americans, Latinos, and children in low-income families.

While the underlying cause of obesity is obvious — more calories are consumed than expended — gaining excess weight is too easy, and losing weight is clearly difficult, or the obesity epidemic would have been solved by now, said Aaron Carroll, a pediatric obesity expert at Indiana University School of Medicine not associated with the new study.

A holistic lifestyle change might be a better way to approach obesity, Carroll said.

"Rather than drill down to a specific eating or exercise change, creating a healthier household may be a better way not only to improve weight, but overall physical and mental health as well," Carroll wrote in an editorial accompanying  they study in the journal.

Ongoing research has suggested that four household routines are associated with healthy weight for children: getting regular and adequate sleep; eating meals together as a family; limiting television viewing; and having no TV in the room where the child sleeps. A 2010 study published in the journal Pediatrics found that preschool-age children in households with these four routines had a rate of obesity 40 percent lower than that of children whose homes had none of these routines.

Now, a team led by Dr. Elsie Taveras, of Harvard Medical School in Boston, and Jess Haines, of the University of Guelph, in Ontario, Canada, has successfully introduced these healthy habits in the homes of low-income families in the Boston area.

The team enrolled 121 families with overweight children, whose homes had TVs in the room where the children slept. Among them, 59 families were assigned to a control group –  they received information via the mail over the next six months about healthy household habits. The other 62 families received in-home counseling about these healthy habits.

The biggest limitation of this intervention approach, however, could be its expense. The researchers hired and trained four bilingual health educators, who conducted four visits and four phone calls to the families. On a nationwide scale, this could constitute a costly means to get children to lose weight.

Noting cost as one possible limitation, Sarah Anderson, associate professor of Epidemiology at The Ohio State University College of Public Health in Columbus,  who was the lead author on the 2010 Pediatrics study identifying healthy home habits, remained optimistic.

"This study shows the potential that these household routines may have for childhood obesity prevention," Anderson told LiveScience. "It is possible that household routines are most effective in promoting children's healthy weight when combined with a warm and responsive style of parent-child interaction."

The social support that came from the repeated, one-on-one contact between researchers and parents may be important, Anderson said.