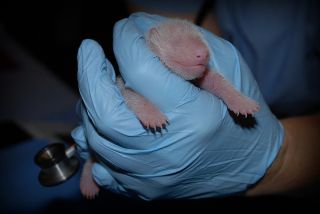 Through genetic testing, Smithsonian scientists confirmed the sex of the cub, born on Aug. 23 to panda mom Mei Xiang. A paternity test also revealed that the baby bear's father is Tian Tian, the zoo's male panda.

A day after giving birth to the live cub, Mei Xiang gave birth to a stillborn, which was also a female sired by Tian Tian, the zoo said, adding that the cubs were fraternal twins.

Both mom and the tiny female cub appear to be healthy, but keepers are maintaining a close watch over the pair, mostly through a camera that's always turned on in the panda den. Zoo staff was able to give the newborn its first exam on Aug. 25, finding that she seemed to be breathing, nursing and digesting normally. The cub weighed about 4.8 ounces (137 grams). She will be named when she is 100 days old, in keeping with Chinese tradition.

Mei Xiang's first cub, named Tai Shan, was born at the zoo in 2005, but now lives at a facility in China. (All pandas officially belong to China under international law.) Her second cub was born on Sept. 16, 2012, but died about a week later, appearing to be underdeveloped.

Conservationists estimate that there are just 1,600 pandas left in the wild. Captive breeding is one way to help bolster the species' population numbers and boost genetic diversity, but it is notoriously difficult. Mei Xiang has only conceived through artificial insemination.