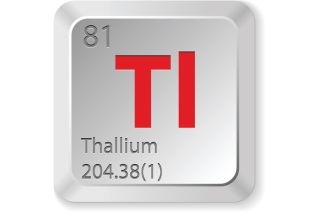 Thallium is a malleable, soft element that can be sliced with a knife. It has a metallic luster that quickly tarnishes when exposed to air to a bluish-green color.

Naturally occurring thallium is a mix of two isotopes. Twenty-five isotopic forms of thallium are recognized.

Thallium is a toxic metal and should not come into direct contact with skin. It’s also suspected as being carcinogenic.

Thallium is found as a mineral in the elements crooksite, lorandite and hutchinsonite. It’s also found as a trace element in iron pyrite and obtained from this ore by roasting the mineral. Small amounts of thallium are found in manganese nodules on the ocean floor.

Thallium sulfate has been used as a rodent and ant killer because it’s odorless and tasteless. However, the use of the product has been prohibited since 1972 in the United States.

Thallium salts have also been used in the treatment of skin diseases, but the high rate of toxicity compared to the therapeutic benefits limited its medicinal applications.