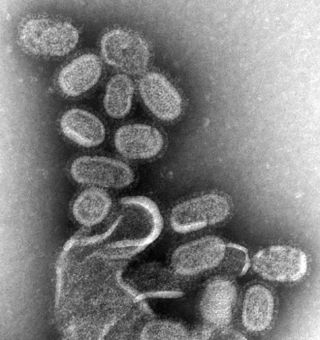 The 1918 Spanish flu killed at least 20 million people around the globe. Fears of a similar pandemic have health officials concerned the death toll could be much higher in a modern outbreak, which researchers say is very likely if the current deadly bird flu morphs into a strain that can be transmitted by humans.

Travel between countries has become vastly more frequent and quicker, which would hasten the spread of a highly contagious and lethal virus.

In the last of a 3-part series, LiveScience examines how a virus jumps from birds to humans and reaches pandemic proportions.

In addition to the 1918 flu, there have been two other pandemic outbreaks -- defined as spreading around the world within a year of being detected -- in the last century.

The H3N2 virus is still in circulation today and is included in this year's flu vaccine.

Both of these started in Asia and, like the 1918 flu, contained a combination of human and avian influenza virus.

In response to the threat of a possible pandemic flu, the United States has published a "National Strategy for Pandemic Influenza" that outlines a three-pillar approach to preventing a major disaster.

Pillar One – Preparedness and Communication: In this stage the focus is on educating the public about the risk of a pandemic flu and producing and stockpiling vaccines and antiviral medications so that people will be prepared if a pandemic breaks out.

Pillar Two – Surveillance and Detection: The best offense is a good defense. This pillar focuses on monitoring the incidence of the virus overseas, an early warning system to prevent the virus from entering the country, and initiating vaccinations.

Pillar Three – Response and Containment: In the event that a pandemic flu enters the U.S. and outbreaks begin, the focus will shift to slowing and preventing the spread of the flu to lessen health, social, and economic impacts. Authorities will have the power to limit nonessential movement of people, goods, and services to and from outbreak areas, limit social gatherings, and even call for quarantines.

Influenza could become a pandemic threat because its genetic information is constantly shifting. The virus can change two ways – the common and subtle "antigenic drift" and the rare but drastic "antigenic shift."

Antigenic drift is the continuous changes in the virus that make it slightly different than previous versions, requiring the yearly production of new vaccines. While your immune system may have developed resistance to previous versions of the H1N1 virus, for example it can't prevent infection against this year's slightly newer version.

Antigenic shift is a major reshuffling of proteins in the virus that results in a new subtype combination of neuraminidase and hemagglutinin surface proteins, in science-speak. If this new subtype has never been seen in humans, or hasn't been seen in many years, most people won't have protection when it enters the population.

If the virus has attributes that allow it to spread easily, it could spread across large regions or around the globe.

The threat for a pandemic flu is very real, health experts say, due to the emergence of the avian influenza A H5N1 virus [more about flu types]. It has already shown to be exceptionally deadly to birds.

Although at least 67 human deaths have been reported in the current outbreak, most of these people were in direct contact with infected birds – either during defeathering, slaughtering, or eating uncooked birds. Scientists still consider it very difficult for this virus to infect humans.

Avian influenza A viruses can transmit from animals to humans in two ways – either directly from a bird or from avian virus-contaminated environments to people, or through an intermediate host, such as a pig.

If infected directly from a bird or the environment, the person will become ill but has little chance of spreading the virus to other people. This is because the virus has not mutated – at least not yet – to be optimally transmittable from person to person, although this could happen in time.

Viruses are made mainly of protein and DNA. The DNA primarily causes the illness, but it's the proteins that determine how well it spreads. There are two main proteins on the surface of the virus – hemagglutinin (H) and neuraminidase (N). Theoretically, human viruses that have recombined to express an H protein that humans have no immunity against are more likely to result in quick, sustained human-to-human spread.

If a pig infected with human influenza A virus becomes infected by avian influenza A, the two strains can mix genetic information. This would yield a new virus that has one or both surface proteins from the avian virus, but most of the genes from the human virus. This means it could be both unrecognizable to human immune systems and easily transferable from person to person.

This type of recombination could also occur in a human co-infected with avian and human influenza A viruses.

"We don't know exactly what it would take to make an avian flu strain that doesn't pass very well from person to person into a virus that can pass from person to person. We hope that the virus isn't smart enough to figure it out," said Kathryn Edwards of Vanderbilt University, who is currently running a study on a potential avian flu vaccine.

Because the avian virus has yet to mutate to the point where it spreads easily among humans, scientists do not know exactly what characteristics to include in a vaccine. However, a study testing the immune response of the outer portion of an inactivated avian H5 strain in people over 65 recently got underway. The vaccine is similar to the regular flu vaccine, but targeted to the avian type.

"Developing an effective vaccine is our best defense," Edwards said. "The elderly, in particular, could be at high risk for complications and death from infection, so it is very important to test the new vaccine in older adults."

"We'll be happy if it generates an immune response similar to other vaccines," Edwards said. "That would at least prevent infections."

Making matters worse, the avian flu has shown signs of resistance to Tamiflu, an antiviral drug that treats the symptoms of the flu and also helps prevent infection in healthy people. It had been planned that the drug could be used to slow the spread of the avian flu until a vaccine is developed, which could take anywhere from six months to a year or more.

"This is the first line of defense," said Yoshihiro Kawaoka of the University of Wisconsin. "It is a drug many countries are stockpiling, and the plan is to rely heavily on it."

But a young Vietnamese girl was given a dose of the drug after expressing mild influenza symptoms, and researchers say she developed a strain of the virus that was highly resistant to the drug.

"We've been watching for this change (in the virus)," said Kawaoka, who published this finding in the Oct. 20 issue of the journal Nature. "This is the first, but we will see others. There's no question about it."

What it is and how it affects us.

How to prevent and treat the flu.

How flu could become a global killer.