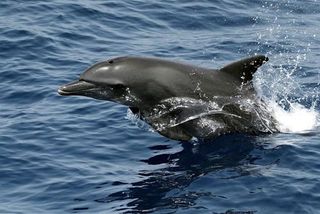 Federal scientists say a virus related to human measles is likely to blame for the mass die-off of bottlenose dolphins along the East Coast. Based on the last outbreak, they say it could affect the species until next year.

Since July 1, the National Oceanic and Atmospheric Administration (NOAA) says 333 dead or sickly bottlenose dolphins have washed up from North Carolina to New York. That's over nine times the historical average for strandings during this period. The bulk of those reports — 174 of them — have come from Virginia.

NOAA officials had already declared it an "unusual mortality event" and had been taking samples from dead dolphins to investigate the cause. So far, 32 of 33 samples tested for morbillivirus were either suspect (25 cases) or confirmed positive (seven cases), researchers with the agency told reporters Tuesday (Aug. 27).  [10 Deadly Diseases That Hopped Across Species]

Dolphin morbillivirus is related to other morbilliviruses that can cause measles in people or canine distemper in dogs, but the pathogens are unlikely to spill over to other species. Bottlenose dolphins catch the disease through direct contact with infected dolphins and respiratory particles, or those particles that travel through the respiratory tract from the air dolphins breathe. Infected animals may develop lesions, brain infections and pneumonia, as well as secondary bacterial, viral and/or fungal infections.

The same disease caused a deadly outbreak 26 years ago when more than 700 dead bottlenose dolphins were found from New Jersey to Florida between June 1987 and May 1988.

"We're expecting that if indeed this plays out the way that die-off occurred that we're looking at mortalities being higher and the moribillivirus spreading southward and likely continuing until spring of 2014," Teri Rowles, National Marine Mammal Stranding Coordinator with NOAA Fisheries, said during a conference call today (Aug. 27).

Researchers suspect this summer's rash of morbillivirus began with a young population that was born after the 1987/1988 outbreak and had no natural defenses against the disease.

"Many of the dolphins younger than 26 years old have limited to no immunity to this virus," Rowles said. "So if the virus is introduced, they don't have the traditional antibodies to protect them."

That also means as the outbreak progresses, the dolphins that survive will build up immunity, and the number of strandings should hopefully decrease.

"It will probably end when the number of susceptible animals dwindles," virologist Jerry Saliki, of the University of Georgia, told reporters. "Not all infected animals will die. As the outbreak proceeds, the number of immune animals will increase."

As they continue to monitor the outbreak, the researchers say they are investigating other factors that may have made the animals more susceptible to the virus. Rowles said they will test for contaminants to see if dolphins with high levels of polychlorinated biphenyls (PCBs) or other man-made toxins were affected more severely.