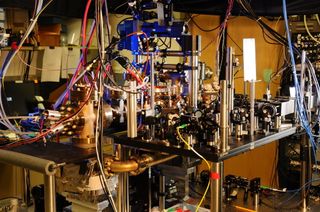 Scientists have designed a new atomic clock, using laser light and ytterbium atoms, that is ten times more stable than previously reported clocks. Ytterbium atoms are generated in an oven (large metal cylinder on the left) and sent to a vacuum chamber in the center of the photo to be manipulated and probed by lasers. Laser light is transported to the clock by five fibers.
(Image: © Burrus/NIST)

Atomic clocks are set to become even more precise than they currently are.

A new technique can ensure that the "ticking" of individual atoms — which is the basis of atomic clocks — is extremely constant, with the interval between ticks varying by less than two parts in 1 quintillion (1 followed by 18 zeros). That would lead to atomic clocks that are about 10 times more stable than the previously described clocks.

The new breakthrough, described today (Aug. 22) in the journal Science, may not help people make their 9 o'clock meetings, but it could pave the way for atomic clocks so precise that physicists could test Einstein's theory of general relativity or probe the mysteries of the fundamental constants. [The 9 Biggest Unsolved Mysteries in Physics]

The current U.S. time standard is set by cesium clocks, in which cesium atoms are pulsed with microwaves. The microwaves cause the cesium atoms' outer electrons to jump to a higher energy level, and the resulting vibration rate sets the clock's tick rate.

But newer atomic clocks have the potential to become even more accurate. Instead of using microwaves, these clocks trap bunches of atoms within standing waves of a powerful laser and excite these atoms with a second laser. The lasers can cause the atoms to vibrate, or "tick," at a higher frequency than the old microwave method could.

"The higher the ticking rate, the more finely you can divide time up," said study co-author Andrew Ludlow, a physicist at the National Institute of Standards and Technology in Boulder, Colo.

Quantum mechanics prohibits scientists from knowing what any particular atom does, precisely, but researchers can average the energy jumps of thousands of atoms to calculate an incredibly precise measure, Ludlow added.

In the current study, Ludlow and his colleagues cooled 10,000 ytterbium atoms to 10 Microkelvin, just a hair's breadth away from absolute zero. Next, they trapped the atoms in tiny wells formed by the laser's standing wave. A second laser, which oscillates 518 trillion times a second, excited the atoms.

The team achieved incredibly stable ticks by developing lasers that produce very little noise, or instability in the light wave. At the same time, they accounted for or eliminated many factors that jostle atoms around and would have led to greater unpredictability in their behavior.

If the new technology can be incorporated into an atomic clock, it could provide incredibly precise measurements of time. That, in turn, could shed light on some of the most mysterious problems in physics.

Einstein's theory of relativity, which explains how gravity warps space-time, is incompatible with quantum mechanics, the reigning model that explains the behavior of the tiny particles that make up matter. Because gravity slows time, atomic clocks will actually tick more slowly in a gravitational field — a phenomenon known as gravitational red shift. But some theories predict that gravitational red shifting breaks down, and ultraprecise clocks could test to see whether that happens by even the tiniest amount.

Other physicists have proposed that the fundamental constants, such as the ratio of electron-to-proton mass or the speed of light in a vacuum, may not be so constant after all. Incredibly precise atomic clocks could begin to test that proposition.

"These clocks are weakly sensitive to the value of these constants, so you can try to ascertain whether the underlying atomic constants are changing," Ludlow told LiveScience.