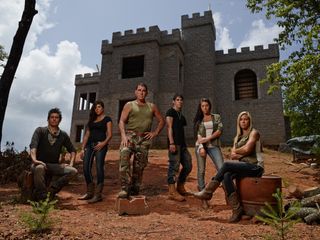 Atop one large foothill here deep in the Carolina woods lies a most unlikely site: a castle, replete with a drawbridge, portcullis — and an underground bunker.

The castle is the handiwork of a family aiming to protect itself from an electromagnetic pulse (EMP), which they think could take out electricity grids. So they're going medieval, training to use crossbows and building a catapult to defend themselves against marauders that might come in a doomsday scenario.

The family is the subject of a new show on the National Geographic Channel called "Doomsday Castle," which premiers at 10 p.m. ET on Tuesday, Aug. 13. Family members aren't disclosing their last name or location for fear of curious and/or hostile fans showing up on their castle step.

The father, Brent Sr., is the ringleader and a retired Army officer, and hatched a plan for the castle before Y2K, when people worried a computer glitch would unleash mass havoc beginning Jan. 1, 2000. While on a press trip to visit the family and their castle, LiveScience got a chance to sit down with Brent Sr. and with some of his 10 children, including Brent II, age 41, as well as younger son Michael and daughter Dawn-Marie. (Brent II is often at odds with the rest of his family and prefers to use the suffix "II" instead of "Jr.")

LiveScience: When did you first get into doomsday prepping?

Brent Sr.: It was before Y2K. I was worried the computers that control everything, from natural gas to electricity, would go down. When they didn't, I cooled off for a couple years because I didn't want people to think I was crazy, but then got back into it. [Photos: Inside the Doomsday Castle]

LiveScience: What motivated you to build a castle?

Brent Sr.: A man with 10 kids has a godly obligation to take care of his children, and I've set up a 100-year trust so the castle can't be sold. Each kid will get the castle for five weeks every year.

LiveScience: What makes you think there will be an electromagnetic pulse (EMP) that could knock out the electrical grid?

Brent Sr.: It's a real possibility. Nuclear explosions can create EMPs — if one was detonated in the high atmosphere, it could knock out power to one-fourth of the United States by destroying computers that run everything. Solar flares are also a risk for EMPs.

Brent II: I think the idea is completely outrageous. But I'm not here for that — I'm here to connect with my family. I'm very anti-violence.

LiveScience: But why build a castle?

Brent Sr.: Most people have enough food for about 10 days. If there are no trucks to replenish the food supply, though, that's a major problem. If the government isn't there to help them out, fighting and looting will eventually start — like you saw during Hurricane Katrina — and could eventually reach the countryside.

The calmest person in the world will turn into a savage if he sees his baby crying and his children go hungry. I built the castle to defend against marauders and to have a place that could function without electricity.

LiveScience: What makes you think that the end is nigh or that disaster is looming?

Brent II: I don't. I think it's a very pessimistic view. But I do think it's a good idea to have a place to wait out hurricanes.

Brent Sr.: When immorality gets to the point where we are at in our society, if God doesn't bring wrath, he removes his hand and [lets bad things happen]. But there will be a time, I do believe, when the wrath will come and the end will come, and the Book of Revelation will come true.

I don't think God talks directly to people, but I do believe that he "whispers" to people, giving them a sense of fear or caution, and gives warnings, like earthquakes and things.

In my circle, we all feel the same thing — that the end of times may be near. But we can't put our finger on why, exactly, we feel this way.

LiveScience: What motivated you to do this show?

Brent Sr.: I'm hoping that through this story, seeing a typically dysfunctional family — we've had fistfights — that this true story will hit home, and that people will come up with a plan if something bad happens.

Dawn-Marie: We want to work together to improve our legacy, and protect this castle that dad has left to us.

Michael: Each person we share this info with is one person that we don't have to fight.

Brent II: I'm here to promote the healthiness of being a prepper and to get closer to my family.

LiveScience: Brent II, you're portrayed in the show as being estranged from your family.

Brent II: It's true. I've been closer to my friends than to my family. And I don't get respect — although now I do, after having done a lot of manual work with them and proving myself.

I call the experience "Doomsday rehab," and I honestly believe it saved my life. I wanted to get healthy. I had been abusing painkillers after being injured a few years ago, and partying a lot.

Working here really cleaned my brain out. It was a tough first couple of weeks. I was extra abrasive.

LiveScience: Is it weird to share this personal and family stuff on TV?

Brent II: I didn't know any other way to reconnect with my family. I was actually the one who first wrote to the casting directors of "Doomsday Preppers" [of which "Doomsday Castle" is a spin-off], telling them that we have a castle with a working toilet where you could s--- on porcelain at the end of the world.

When I first told my dad, he nearly disowned me. But I kept working on him, and he eventually agreed that it'd be good to get this message about prepping out there.

I never could connect with people just having a drink or a dinner with them. But installing doors with Dawn-Marie allowed us to connect, and doing labor with the rest of the family — these are all things that get you that respect.

LiveScience: What do you want people to get out of the show?

Brent II: That it's never too late to connect with your family. If you have marriage problems, if you have substance-abuse problems — these all work themselves out when you prepare for the end of the world.