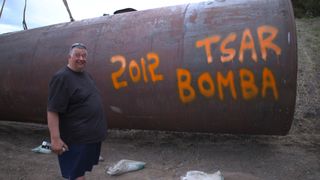 Big Al is featured on the second season of "Doomsday Preppers" and fears that the Russians might send a nuclear missile toward the U.S. at any moment. Here he is photographed with a spent fuel tank made of thick metal (good for blocking gamma rays from an atomic blast) that will serve as an add-on to his current underground bunker.
(Image: © National Geographic Channels)

Big Al will not drink his own urine. He's very clear about that. But he does spend three months of every year in his underground bunker because he fears that the Russians might send a nuclear missile toward Uncle Sam at any moment.

His bunker, buried 10 feet (3 meters) underground in an undisclosed location, will protect him from the gamma rays of an atomic bomb. But the temperature outside his bunker dips to minus 40 degrees Fahrenheit (minus 40 degrees Celsius) in the winter, so he stores 10,000 pounds (4,536 kilograms) of wood inside to keep him warm using his wood-burning stove (which curiously seems to lack a chimney), and a one-year supply of "bunker stew." He is also a music producer, and has lately turned to writing country songs about preparing for the apocalypse.

Big Al (who declined to give his last name) is just one person featured in the second season of "Doomsday Preppers," a show on the National Geographic Channel that profiles extreme survivalists who believe the world as we know it may soon end. The show's first season was the highest-rated on the network at the time. The second season debuts Tuesday (Nov. 13) at 9 p.m. ET.

What the survivalists believe

The show also features Braxton and Kara Southwick, a couple who lives in a suburb of Salt Lake City with their six kids. Braxton believes terrorists may attack the United States with weaponized smallpox, and for that reason, the family has stockpiled more than 2,000 pounds (907 kg) of flour, sugar and wheat, along with 14 guns and eight chickens, enough food to support their family of eight for more than one year. Braxton Southwick also buried 1,000 pounds of coal in his backyard.

Another prepper, Wilma Bryant, stockpiles insulin for herself and her diabetic daughter because she thinks a series of EF-5 tornadoes will destroy much of the country. [End of the World? Top Doomsday Fears]

The recent experience of Hurricane Sandy is also a reminder that a certain level of preparedness makes sense, Hunt said.

John Hoopes, a researcher at the University of Kansas and expert on the so-called Mayan doomsday prophecy, said he thinks preppers' motivation "stems from apprehension about the U.S. government and its ability to deal with people's fears about security, the economy and the welfare of their families." Many also have concerns about government interference with private autonomy, he said. Many more of the preppers are also men, which he thinks speaks to their need to feel "in charge" and provide protection for their wives and families.

Preppers' reference to the Mayan "doomsday" myth helps to deflect discussion of some of the underlying issues they face; the myth is a cover for fears that are probably less politically correct to admit, he said.

"These include fears of the increasing ethnic and cultural diversity in American society and fears that are rooted in racism and perceptions that [minorities] are threats," Hoopes said. "It's telling that it is members of that historically dominant majority who are the ones doing the prepping. Are minorities in urban areas prepping? Are gays and lesbians prepping? I don't think so."