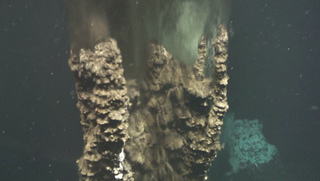 In 2008, researchers from Norway's University of Bergen discovered Loki's Castle, an underwater hydrothermal field at a depth of 7,875 feet (2,400 meters). The deep-sea volcanic vents in this complex are called black smokers. The ultra-heated water spewing from these vents looks dark and smoky thanks to mineral-rich compounds.
(Image: © Center for Geobiology, University of Bergen)

The cluster of hydrothermal vents, known as Loki's Castle, was only discovered in 2008. The seafloor chimneys are churning out super-heated, mineral-rich water around 7,875 feet (2,400 meters) below the water's surface, many miles inside the Arctic Circle on the Mid-Atlantic Ridge between Norway and Greenland at the 73 degrees north latitude.

The five vents, called black smokers, host a rich array of life, including 20 new animal species found this summer that have yet to be described by scientists. [In Photos: Spooky Seafloor Vents ]

"These discoveries are incredibly interesting as they represent a part of the Norwegian nature that is under-explored," said researcher Dag Rune Olsen, who is the current rector of Norway's University of Bergen. "They represent a part of nature where conditions are extreme and where we expect to find a lot of new and exciting biology."

Olsen and Rolf Pedersen, a geologist at the university, met with Norway’s Minister of the Environment, Bård Vegar Solhjell, last week to talk about preserving these areas and their unique wildlife. They think Loki's Castle (or "Lokeslottet" in Norwegian) could become an underwater national park to protect its unique ecosystem from being exploited by industrial interests.

Hydrothermal vents are created where the seafloor spreads apart and some scientists think they could have been cauldrons for the origin of life on Earth.

Dissolved minerals that get spewed out of the hydrothermal vents solidify when they hit icy surrounding waters. The resulting metal deposits forming around Loki's Castle are massive and have already captured the interest of mining companies, though the material value of these accumulations is still unknown, the researchers say.

The hot streams of water coming out of the vents at 608 degrees Fahrenheit (320 degrees Celsius) have also attracted life forms that wouldn't otherwise thrive on the dark, cold seafloor. There are white mats of heat-loving bacteria feasting on the minerals emitted by the vents, such as hydrogen sulfide, methane and hydrogen. Scientists are just starting to study the previously unknown animals that live around these bacterial colonies. Video from a remotely operated underwater vehicle exploring the area also showed known creatures like dumbo octopuses swimming around the volcanic fields.

The researchers have previously discovered other volcanic fields in the region, including Soria Moria, a complex rich with wildlife about 2,300 feet (700 m) below the surface, 60 miles (100 kilometers) off the coast of the remote Jan Mayen island.