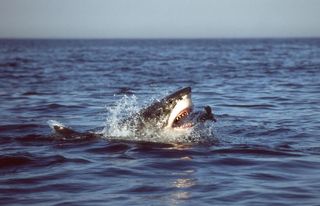 The Discovery Channel's Shark Week got off to a less-than-stellar start this weekend with a two-hour piece devoted to Megalodon, a prehistoric giant shark that grew up to 60 feet (18 meters) long and had jaws powerful enough to crush an automobile. The only problem is that the show suggested these animals still exist, which is definitely not the case. Up to 70 percent of the audience may now think that Megalodon is not extinct, according to a poll from the Discovery Channel.

That's too bad, because there are tons of bizarre and completely true facts about sharks that are more arresting than fiction. And although humans have always been fascinated by sharks, we know surprisingly little about them.

One thing we do know is how important sharks are to ocean ecosystems, where they keep populations of midlevel predators in check; when they disappear, changes can ripple through the food web and even affect the presence of marine plants, studies have shown. But as many as 100 million sharks are killed each year for their meat and their fins, which are made into shark fin soup. This dish is considered a delicacy and is prized in China, despite evidence that it can contain high levels of toxins like mercury. [On the Brink: A Gallery of Wild Sharks]

Conservationists hope that if people knew more about how awesome sharks are, perhaps they'd be less likely to condone the killing of these creatures, which have been around for about 420 million years and have changed little since then.

On that note, here are some awesomely weird — and completely true — facts about sharks to sink your teeth into:

1.Even if sharks could brush their teeth, they wouldn't need to: Shark teeth are covered in fluoride, making them cavity-resistant. One 2012 study published in the Journal of Structural Biology found that sharks' enamel is made up of a chemical called fluoroapatite, which is resistant to acid produced by bacteria. This, combined with the fact that most sharks replace their teeth throughout their lives, means that sharks have excellent dental health. A gold star for you at your next dentist appointment, sharks!

2.The cookiecutter shark can take ice-cream-scoop-shaped bites out of other sharks, including great whites, which are many times larger. They also have been known to bite holes in cables and other materials used by U.S. Navy submarines, which has necessitated a switch to a fiberglass, bite-proof coating. [More Weird Shark Facts]

3.The skin of a female shark is much thicker than that of a male because males bite females during mating, said David Shiffman, a shark researcher and doctoral student at the University of Miami.

4. The Greenland shark, the slowest-moving fish ever recorded, has been found with reindeer, polar bears and fast-moving seals in its stomach, Shiffman told LiveScience. It's thought that Greenland sharks prey upon sleeping seals, which snooze in the water to avoid polar bears.

5.  Lantern sharks can glow to disguise themselves in the deep ocean, emitting the same amount of light as that which is filtering down from above; this way, they don't create a "shadow." Velvet belly lantern sharks have glowing spines that may be used to ward off predators.