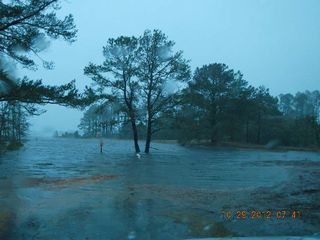 The storm surge from Hurricane Sandy leaves much of Chincoteague National Wildlife Refuge in Maryland under water, including this boat ramp along the Assateague Channel, on Monday, Oct. 29, 2012.
(Image: © J. Fair/USFWS)

Rob Moore is a senior policy analyst for NRDC where he is part of a team devoted to protecting U.S. water resources. Hecontributed this article to Live Science's Expert Voices: Op-Ed & Insights.

As society looks toward a future with rising sea levels and more frequent and severe storms, the United States can also expect to see more frequent and severe flooding along rivers and coastlines. That means property owners will increasingly turn to the Federal Emergency Management Agency (FEMA) and its National Flood Insurance Program to bail them out.

But why does the federal government underwrite 5.6 million flood insurance policies — in many cases at highly subsidized rates?

Originally, the National Flood Insurance Program was intended to provide insurance to people who could not get flood insurance from private insurance companies. In the past, flood insurance was not easy to come by, since private insurers had largely left that market. Beyond providing insurance, the program was also tasked with mapping out the nation's most flood-prone areas and helping communities prepare for and avoid damage from flooding. In a sense, the program was intended to manage the nation's flooding risk.

But in practice, the program has not managed that risk very well. One could argue that it has, in part, incentivized the development of infrastructure along floodplains and coastal areas. At best, the program has failed to provide a disincentive.

Just last week the National Academy of Sciences published a report about the National Flood Insurance Program — looking specifically at how levees are addressed by the program. But, this report also includes a good overview of the program since its inception and its many past problems, which include:

Given these shortcomings, it's not surprising that the program will be between $25 billion and $30 billion in debt once all claims from Hurricane Sandy are paid out. It's a program that is almost designed to fail.

Reforms have been made. Just last year, the Biggert-Waters Flood Insurance Reform Act begins to address some of the problems described above, but a lot more needs to be done. Those common sense reforms are getting a lot of push-back as property owners find out that they will pay higher premiums that more accurately reflect their flood risk.

Americans should ask, "What is the purpose of the National Flood Insurance Program?"

The way the program has evolved, its purpose seems to have less to do with fixing problems associated with flooding, and more to do with prolonging those problems.

The program's purpose should be to prepare the United States for a future where flooding is going to be more frequent and severe. It should provide a social safety net for flood victims. It should be there to help people get their lives back together and to perhaps relocate to a safer location, outside the area where floods are most likely. It should be guiding the nation to a place where Americans are less at risk, particularly as the climate warms.

But so far, it has failed to deliver.

This article was adapted from the blog post What is the Purpose of the National Flood Insurance Program?, which will appear as the first installment of a series on NRDC's blog Switchboard. The views expressed are those of the author and do not necessarily reflect the views of the publisher. This article was originally published on Live Science.