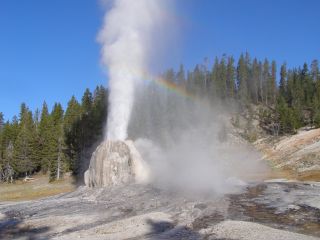 Lone Star Geyser in Yellowstone National Park erupts about every three hours. It is one of the park's biggest geysers.
(Image: © Shaul Hurwitz)

Despite more than a century of scrutiny, the inner workings of Old Faithful and other Yellowstone National Park geysers remain a mystery.

Scientists still hash over the basics, such as how water and steam pressurizes underground before a geyser erupts. Now, a high-tech look at Lone Star Geyser, one of the park's most punctual bubblers, could finally solve some of these long-standing puzzles. The research may also help scientists better understand and predict volcanic eruptions.

"The signals we record in geysers may put better constraints on the sources that generate those signals in volcanoes," said Shaul Hurwitz, a co-author of the study and a research hydrologist with the U.S. Geological Survey in Menlo Park, Calif.

Geysers are like miniature volcanoes, with tiny tremors that warn of coming blasts and deathly hot fluids fountaining in the air. The big differences between the two are the plumbing — water versus lava — and the punctuality. But the predictability of geysers makes them an ideal test bed for figuring out how eruptions work.

In 2010, Hurwitz corralled a baker's dozen of geoscientists from around the world for a weeklong experiment at Lone Star Geyser. They measured water discharge, ground motions, seismic waves and sound waves, and recorded high-speed visible and infrared video. Lone Star Geyser erupts every three hours. [Video: A Scenic Tour of Yellowstone National Park]

The results help explain the processes controlling a geyser's graceful jets of water and steam, as well as what's happening underground before, during and after an eruption, the researchers said. The findings were published June 19 in the Journal of Geophysical Research: Solid Earth.

The experiment revealed Lone Star's eruption has four distinct phases, each with a unique geophysical signal, Hurwitz said. As pressure builds up underground, a "preplay" phase, with pulses of steam and water, signals the coming outburst. Then, the eruption starts, with water and steam fountaining at 36 to 63 mph (58 to 101 km/h). The researchers tracked particles in the jetting water with the high-speed cameras to calculate the speed. A quiet post-eruption phase follows, finishing with a recharge phase while the geyser cone refills.

About half of the world's 1,000 known geysers are in Yellowstone, which is an enormous volcanic field that has seen at least three giant, caldera-forming eruptions in the past. Geysers like Old Faithful and Lone Star are usually found near recently active volcanoes, where magma can heat subsurface water. They form when choke points prevent water and steam from rising underground, trapping bubbles that eventually explode into a fountaining geyser eruption.

The total heat output of Lone Star Geyser was found to be about 1.4 megawatts, which is enough energy to power 1,000 homes for one hour. But the heat amounts to less than 0.1 percent of the total heat output from the whole Yellowstone caldera, Hurwitz said. This suggests that most of the heat trying to escape to the surface (from magma deep in the crust) radiates out through geothermal features that release steam, such as in the eastern part of the park.

"Steam can transport a lot of heat," Hurwitz said. "Even if you took all the geysers in Yellowstone, the total heat output is relatively negligible."

Hurwitz and his co-authors are now preparing another journal article on the shape of Lone Star Geyser's underground plumbing, he said.

Studies published recently on geysers in the Valley of the Geysers on Russia's Kamchatka Peninsula and Yellowstone's Old Faithful found many geyser chambers may be egg-shaped instead of long, narrow pipes, as researchers had previously thought.

"Geysers are not as simple as one can see by eye," Hurwitz said.