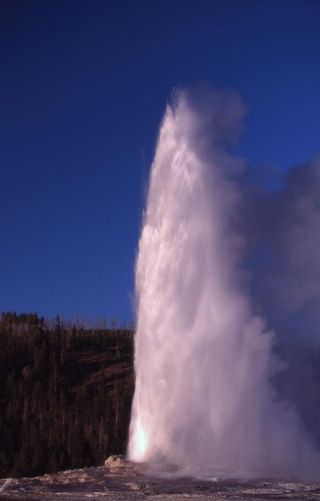 When you think of Yellowstone National Park's famous Old Faithful geyser, you may think of its power, its size or even its reliability. But you probably don't think about where its water comes from.

Unless you're a geochemist.

A team from the U.S. Geological Survey in Menlo Park, Calif., recently dove into the question of just where Yellowstone's water comes from. Their findings indicate that the region — and its variety of geysers, mud pots and hydrothermal pools — could be supplied by a single water source that continuously boils, mixes and flows its way through the park.

"Visitors to Yellowstone and even professional naturalists may not realize that the acid fumaroles and mud pots at Yellowstone represent the steam boiled off of deeper boiling groundwater that ultimately emerges kilometers away," said Jacob Lowenstern, the geochemist who led the team's study.

Yellowstone's thermal waters range from acidic steam vents (sometimes called fumaroles) and mud pots to hot springs and bursting geysers like Old Faithful. Though their colors, sizes and even smells vary greatly, nearly all of the park's hydrothermal features fall within two categories. [Infographic: The Geology of Yellowstone]

Yellowstone's geysers and hot springs are rich in chlorine and silica and have a pH around 9. (Pure water is given a pH of 7. A pH above 7 indicates basic water, while a pH below 7 indicates acidic water.) They make up around 80 to 90 percent of the park's total water discharge, Lowenstern said.

Acid mud pots and fumaroles, on the other hand, are rich in sulfuric acid and have a pH as low as 2. While their total volume is miniscule compared with geysers and hot springs, these acidic waters are much more widespread and cover a greater percentage of the park's land.

The challenge for Lowenstern's team was to explain how these two distinct types of water could originate from the same source.

"To answer the question, we looked not just at 'what' but 'how much'," Lowenstern told OurAmazingPlanet. "This study is unique because it looks both at the chemistry of waters and gases, as well as the magnitude of their discharges — something that is notoriously difficult to constrain."

Using waters from the Heart Lake Geyser Basin, a 4.6-square-mile (12 square kilometers) watershed within Yellowstone National Park that contains both acidic and chlorine-rich waters, Lowenstern's group set out to track the water's geochemical signatures from the original source to the basin's geysers and fumaroles.

They calculated that the underground source of Heart Lake's water is a deep chlorine-rich reservoir with a temperature around 401 degrees Fahrenheit (205 degrees Celsius). Water that's deep underground doesn't boil at the normal 212 F (100 C) because it's under more pressure.

As the hot water rises toward the surface, it begins to boil, creating the steam that characterizes the park's many fumaroles. At the same time, as the water moves toward the surface, it picks up sulfuric acid produced by thermophilic microorganisms that break down hydrogen sulfide in the rocks and soil. Once it condenses, the acidic steam collects in acid pools and mud pots.

Later, as the remaining water continues to flow below ground, it mixes with rainwater, its pH rises and it becomes even more chlorine-rich. This is the type of water that collects in Yellowstone's hot springs and below its geysers.

"Yellowstone is one of the largest sources of geothermal heat in the world, and our study is a step in putting together a better understanding of how much heat and gas comes out of it," Lowenstern said. "Yellowstone is enormous, so you pretty much have to work at one part at a time."