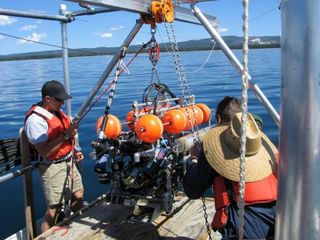 Down in the inky black bottom water of Yellowstone Lake is a rare oasis of life, according to the first in-depth study of the biology surrounding a geothermal vent in the lake.

A colony of moss, worms and various forms of shrimp live in the midst of hundreds of geothermal vents where the water is about 90 degrees Fahrenheit (32 degrees Celsius), the study found.

The vent is close to 100 feet (30 meters) below the surface of Yellowstone Lake and a third of a mile offshore in the West Thumb region of Wyoming. The worms and shrimp live among approximately 2 feet (0.6 meters) of moss that encircles the vent.

"This particular vent seemed unique relative to all other active vents thus far observed in the lake in that it is robustly colonized by plants," the study researchers wrote.

The team explored the deep water with an unmanned robot that is about half the size of a household refrigerator, known as a Remotely Operated Vehicle, built by the same person who built a much larger rover for exploring the Titanic.

The researchers discovered Fontinalis moss, not known to grow in such extreme conditions, and a worm associated with the moss, which had never been reported in North America.

The vent is evidently responsible for the moss being able to live in what humans perceive as total darkness, but these plants obviously have the ability to somehow find and use very low light, said John Varley, a study team member with Montana State University in Bozeman.

At times, the scene around the vent looks like it belongs in a snow globe because of a beige-colored silica-and-aluminum mineral that flies out of the vent and settles on the moss, which further lessens the ability of the moss to acquire light that is essential for it to photosynthesize.

The moss feeds on nutrients in the vent water, which then feeds the shrimp and worms. The vent water also contains toxins such as arsenic and cadmium. It's super-saturated with carbon dioxide, hydrogen and other gases.

The scientists liken each vent to an island with its own chemistry and conditions. Future research may focus on genetic communication between those islands, Varley said.

Yellowstone National Park  is required to document the park's biodiversity, and the broader study being conducted by MSU at least doubles the list of organisms known to live there, Varley said.

The study is detailed in the September edition of the journal of Geobiology.