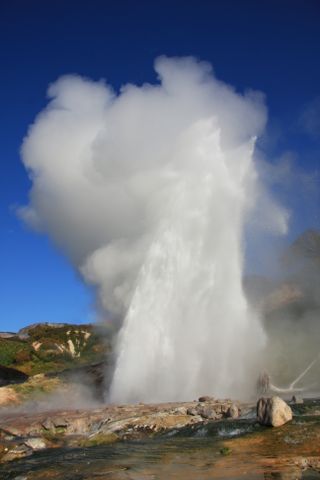 Velikan Geyser, one of the largest geysers in the famed Valley of the Geysers on Russia's volcanic Kamchakta Peninsula.
(Image: © Alexander Belousov )

The spectacular steam and water fountains erupting from geysers makes tourists go "ooh" and "aah," but they present a plumbing problem for scientists: What goes on underground beneath a geyser?

Are there long, narrow conduits like drinking straws running up to the surface, or do big chambers trap bubbles and water before they explode into the air?

A couple of fearless geologists decided the best way to solve the mystery was to look inside a geyser with a sturdy video camera. With only raingear for protection, Alexander Belousov and Marina Belousova, researchers at Russia's Institute of Volcanology and Seismology, lowered a camera into six geysers in the famed Valley of the Geysers on Russia's volcanic Kamchatka Peninsula.

The videos, combined with studies of rocks surrounding extinct geysers, revealed that the Kamchatka geysers aren't fed by long, narrow tubes, as once thought. Instead, bubble traps form between jumbled boulders deposited by landslides.The results provide a new model for understanding how geysers work, the researchers said. The study was published online Jan. 25 in the journal Geology.

"Our work has demonstrated how many geysers can be formed in one small area, and why you have a few places where there are many geysers with very different discharge rates with different periods," Belousov told OurAmazingPlanet.

Belousov and his colleagues built a custom camera that can withstand the boiling water and violent steam explosions within a geyser. On three trips to the Valley of the Geysers, Belousov gently lowered the camera into a geyser with a steel cable or a flexible pole, then filmed an eruption. The videos show boulders and burbling bubbles while the geyser rests, then bursts of steam during fountaining eruptions. [Video: Inside a Gurgling Geyser]

Soon after the researchers started their study in 2005, a landslide buried part of the Valley of the Geysers. As a result of changes caused by the landslide, extinct geysers were exposed, revealing more clues to the plumbing below.

"Looking at the outcrops and having the information from the video inside the geysers, I suddenly realized why the geysers are contorted," Belousov said.

The contorted conduits are built from boulders deposited by ancient landslides, Belousov said. The landslides have covered the region's hydrothermal vents with jumbled rocks of different sizes, and spaces within the rocks form bubble traps.

Geysers are rare features — only about 1,000 exist around the world. To form a geyser, there must be a volcanic heat source to warm water, plentiful groundwater, open spaces in the overlying rock for the water to escape, and a way to trap bubbles.

Boiling water rising from deep in a hydrothermal system will always contain some bubbles of steam. When the rising water meets a bubble trap, the steam bubbles start to gather in place, displacing water. Eventually, enough steam collects that it can push water ahead of it, up through the remaining channels to the surface, causing a violent steam explosion that bursts into the sky as a fountain.

Belousov suggests that the same model could also apply at Yellowstone. Geologists have long thought that long, narrow conduits in rhyolite lava feed the valley's famous geysers, including Old Faithful. Sinter, or silica rock, built up in the conduits, forming bubble traps, scientists suggested. But Belousov thinks Yellowstone's geysers may instead be plumbed through moraines, massive rock piles left behind by glaciers that once covered the region.

"Moraines have very similar mechanical properties to landslides, so this explains why there are so many geysers in Yellowstone," he said.