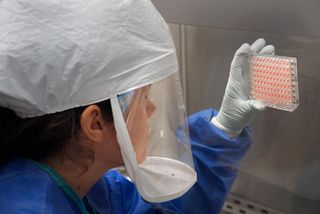 This Centers for Disease Control (CDC) scientist is measuring the amount of H7N9 virus that has been grown and harvested in CDC's laboratory.
(Image: © CDC/ Douglas E. Jordan)

Some strains of the H7N9 bird flu in China are becoming resistant to the only antiviral drugs doctors have left to treat the infection, a new study suggests.

Treating such "mixed populations" of flu viruses within a single patient can be problematic — giving the patient oseltamivir or zanamivir may increase resistance to those drugs.

However, when a person is sick with H7N9 bird flu, doctors often don't have time to test the infection for resistance before beginning treatment, Webby said. Instead, they quickly begin treatment with oseltamivir or zanamivir.

"Even though we know that these viruses may become resistant to [the drugs], essentially, it’s the only option," Webby said. H7N9 viruses are already resistant to a different class of antiviral drugs, called M2 ion channel blockers.

H7N9 resistance to antiviral drugs could become more of a problem if the virus develops the ability to spread from person to person, Webby said. So far, there have been no reports of sustained human-to-human transmission of H7N9.

H7N9 emerged in China in February, and so far, has infected 132 people, including 43 who have died. [See New Bird Flu Virus: 6 Things You Should Know].

Because the new study tested just one patient, it's unclear how widespread H7N9 antiviral resistance is. Another recent study published in the journal the Lancet found that two out of 14 patients with H7N9 had infections that were resistant to oseltamivir and zanamivir.

The new study also found that a test widely used to detect antiviral resistance does not work in patients who have "mixed" infections. The test — which assesses the activity of a particular viral enzyme — can come back negative (no antiviral resistance), even though a portion of the viruses infecting a person are in fact drug resistant.

To overcome this, researchers should always use a gene-based test (which looks at the genetic sequence of the virus) when trying to determine whether a person is infected with drug-resistant H7N9, the researchers said.

The study is published in the July/August issue of the journal mBio.