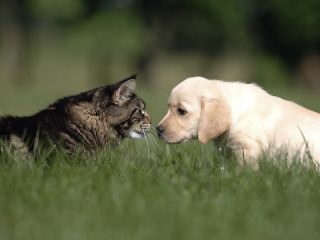 Wayne Pacelle is the president and chief executive officer of The Humane Society of the United States (HSUS). This Op-Ed was adapted from his post on the blog A Humane Nation, where it ran before appearing in LiveScience's Expert Voices: Op-Ed & Insights.

This past week, lawmakers on Capitol Hill took a step forward in their efforts to get laboratory chimps to sanctuaries, but animals suffered a setback in the House with the passage of a highly partisan, retrograde farm bill that could derail state policies on animal welfare and represents a missed opportunity to advance an historic agreement to reduce the misery that laying hens endure in battery cages.

Hidden harm in the farm bill

With not a single Democrat supporting the Farm Bill, and only 12 Republicans voting against it, the House narrowly passed its pared-down version, which excluded all Supplemental Nutrition Assistance Program funding (more commonly known as food stamps), by a vote of 216 to 208. The bill approved by the House includes the dangerous and overreaching King amendment, which could nullify dozens of state laws to protect animals, the environment, worker safety and food safety. Introduced by Rep. Steve King (R-IA), it seeksto erode the progress that states have made ensuring that farm animals are treated humanely.

Republican leaders blocked consideration of a series of other animal welfare amendments relating to banning barren battery cages, cracking down on horse slaughter, and upgrading the federal law against horse soring. (Horse soring is the intentional infliction of pain to a horse's legs or hooves, which forces the horse into an artificial, exaggerated gait, a practice often associated with Tennessee walking horses.) The farm bill does, however, include one top HSUS priority — an upgrade of the federal animal-fighting law, making it a crime to attend or bring a minor to a dogfight or a cockfight.

Yeteven with the anti-dogfighting and anti-cockfighting provision included, it's impossible for HSUS to support this disastrous farm bill because of the radical and overreaching King amendment that threatens so many animal welfare laws.

At some point soon it is likely the Senate and House will conduct a conference on the farm bill, and those of us at HSUS will do our best to nix the King amendment (the Senate version does not include any provision similar to the King amendment) and to retain a strong animal fighting provision (which is included in both the Senate and House bills.) HSUS will have to seek separate pathways to enact other major reform items like horse soring and horse slaughter. The denial of a fair vote on the egg industry reforms hurts prospects for that measure, but HSUS will look for any available vehicle to give the full House and Senate an opportunity to vote on this important legislation.

On the good news front, today the Senate Appropriations Committee approved a spending bill for fiscal year 2014 for the Labor, Health and Human Services and Education departments, and thanks to the tremendous leadership of Chairman Tom Harkin (D-IA), that bill included language to allow continued National Institutes of Health (NIH) funding of chimpanzee care at the national chimpanzee sanctuary system — a needed step if NIH is to follow up on its recently announced plans to transfer the vast majority of chimps out of labs and into safer, more peaceful settings.

Today's action was a technical fix to a 2000 law, which will allow NIH to save money by supporting chimp care at sanctuaries instead of laboratory settings. The fact is, NIH has a duty to provide care for these chimps, but it turns out that caring for them at sanctuaries is cheaper than caring for them in labs — even though the living conditions for the animals are far superior at the sanctuaries.

So, today's outcome is great for chimps , but also welcomed by taxpayers. HSUS will be working hard to assure that this language is included in final appropriations legislation that is sent to President Obama for his signature.

Legislative change happens in stages, and it can be exhilarating or deeply frustrating. Congress presented a mix of both this past week, but no final outcomes. The story is not complete on any of the items mentioned above, and HSUS will keep up the pressure on every one of these issues.