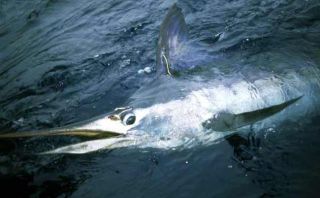 Although most fish are cold-blooded, swordfish, tuna, and some species of sharks are able to elevate the temperature in parts of their bodies. Swordfish in particular have been found to keep their eyes 18-27 degrees Fahrenheit (10-15 Celsius) above the surrounding water temperature.

Recent research suggests that depending on how deep swordfish and other predatory fish are, and how much light is available, their eyes operate at different temperatures and different shutter speeds, allowing them to better track agile prey.

"One of their eye muscles is modified to act like a furnace," said Richard Brill of the National Marine Fisheries Service. "It is chock-a-block full of mitochondria."

Mitochondria are the energy powerhouses in cells. This special eye muscle in the swordfish converts its energy directly into heat instead of motion.

"At the biochemical level, it is similar to what goes on in mammals," Brill told LiveScience in a telephone interview.

Swordfish subsist predominantly on squid, which they follow from shallow waters at night to deep waters in the day. They rely heavily on vision to catch the darting squid.

Brill's team discovered that the swordfish improve their temporal resolution by warming their eyes. This resolution is measured by a flicker fusion frequency (FFF).

One can think of the FFF as how fast a TV or computer screen must refresh itself for the viewer to perceive smooth motion. In bright light, the human eye has an FFF of about or 60 frames per second, or 60 Hertz.

The swordfish likely warm their eyes to keep a bead on their quick-moving prey. But Brill said they may not always want fast eyes.

"Warm eyes won't do them much good at great depths and low light levels," he said.

To understand how slower eyes could sometimes be an advantage, Brill compared it to the shutter speed on a camera. In the darkness at 900 meters below the surface, a swordfish might want to keep its "shutter" open longer to gather more light.

"The downside is that anything moving will look blurry," Brill said. Fortunately for the swordfish, "the squid are probably not as lively in deep, cold waters."

The scientists, however, do not know if swordfish can control the warming of their eyes.

All the tests were done on board a ship, where the team caught and killed swordfish to extract retinas - which can survive for a few hours in a special solution (none of the fish went to waste -- the team ate all of them for dinner). The scientists measured the electrical response of these retinas to flashes of light.

Conceivably, FFF measurements can be done on living fish, but because swordfish weigh between 150 and 700 pounds, Brill said that they are "too big and angry" to work with alive.

This research was done in part to try and save sea turtles, since fishermen - using chemical light sticks to catch swordfish - end up snagging the endangered turtles on their long lines as well.

"We want to know what they can do to still be effective in attracting the swordfish but not the sea turtles," Brill said.

One idea is to use flashing lights that might get the attention of swordfish but not turtles. Other research is looking at the color-sensitivity of both animals. It turns out that swordfish are somewhat color-blind - they mostly see in the blue part of the spectrum. Turtles, on the other hand, can perceive a broader range of colors.

Perhaps there is a way to scare sea turtles away with orange light, which the swordfish cannot see, Brill said.