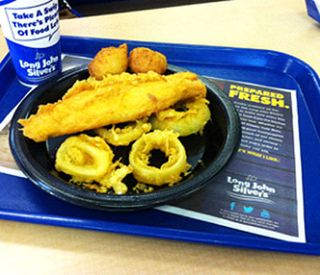 Long John Silvers' Big Catch with onion rings has been named the "Worst Restaurant Meal in America," by the CSPI
(Image: © Center for Science in the Public Interest)

The worst restaurant meal in America is not a burger and fries, but fried fish and dough, one advocacy group says.

Out of all the unhealthy food choices out there, a meal at the fast-food seafood restaurant Long John Silver's — the "Big Catch with Onion Rings" — won the title of worst restaurant meal, according to Center for Science and the Public interest, a consumer advocacy organization.

The meal, which was added to the chain's menu in May, consists of a large piece of breaded, fried haddock (7 to 8 ounces), hush puppies (fried cornmeal batter) and onion rings. It has 33 grams of trans fat, 19 grams of saturated fat and 3,700 milligrams of sodium, the CSPI says.

The organization said it was startled by the amount of trans fat in the meal — which is 16 times the recommended daily limit. (The American Heart Association recommends people consume no more than 2 grams of trans fat per day.)

The Big Catch meal, which contains 1,350 calories, does not have an exorbitant amount of calories compared with some restaurant meals, but the fat and sodium content of the dish gave it the edge for the title, the CSPI says.

"Long John Silver’s Big Catch meal deserves to be buried 20,000 leagues under the sea," Michael F. Jacobson, CSPI's executive director, said in a statement. "This company is taking perfectly healthy fish — and entombing it in a thick crust of batter and partially hydrogenated oil. The result? A heart attack on a hook."

“It might have been defensible to use hydrogenated oil in the 1980s, before trans fat’s harmfulness was discovered, but no longer," Dr. Walter C. Willett, chair of the nutrition department at the Harvard School of Public Health, said in a statement.

The organization's lab test revealed that the Big Catch contains about 4.5 ounces of actual fish, and nearly 3 ounces of batter.

CSPI says it will sue Long John Silver’s if the chain continues to use partially hydrogenated oil in its fryers. By law, restaurants in California cannot use trans fat in their fryers, and chains in California contacted by CSPI said they used canola oil. (Trans fats are also banned in some cities, including New York City.)

A statement on the Long John Silver's website said that "Big Catch is a limited time only special," that can be paired with a number of side items. "Long John Silver’s offers a variety of meal choices including baked fish and shrimp that can satisfy almost every diner’s dietary choices. We stand behind our published food data and will review any requests from CSPI that raise questions about our data," the statement said.