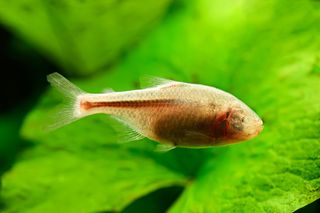 What makes blind fish rain from the sky over Yoro, Honduras, in an event known as "lluvia de peces"?
(Image: © HamsterMan | Shutterstock.com)

Every year for the past 100 years or so, the little city of Yoro, Honduras, has experienced some very strange weather.

Typically occurring in May or June, "lluvia de peces" or "rain of fish" is an annual weather event in which hundreds of fish rain from the sky onto the city's streets in the wake of severe thunderstorms.

"Fish rain" or "animal rain," as the phenomenon is commonly known, has been reported around the world for centuries. But scientific explanations for why the phenomenon occurs are few and far between.

One hypothesis suggests that a fish-rain such as lluvia de peces originates with waterspouts, which are tornadoes that move over water, sucking up small creatures living below the surface — usually fish and frogs — and depositing them elsewhere.

However, waterspouts are not known to carry their aquatic cargo great distances. This doesn't help explain Yoro's fishy weather, because the fish that end up stranded there are not indigenous to local rivers or streams.

If the waterspout theory were correct, then Yoro's fish would have to come from the next-closest body of water — the Atlantic Ocean — and that's about 125 miles (200 kilometers) away.

Local legend has it that the lluvia de peces event is actually a blessing bestowed upon the people of Yoro by Father Jose Manuel Subirana, a Spanish missionary who visited the area in the 1860s and prayed for the region's poor and hungry, asking God to provide them with food.

Perhaps the most likely theory to explain the lluvia de peces phenomenon is the one proposed by a team of National Geographic scientists, who witnessed this bizarre event while on assignment in Yoro in the 1970s.

After noting that the washed-up fish were completely blind, the scientists concluded that the Yoro fish don't actually fall from the sky. Instead, the heavy rains preceding their appearance probably force these subterranean fish above ground.

While this theory of the lluvia de peces makes the most sense, it's also the least romantic, and is therefore largely ignored.