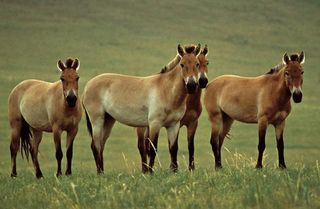 Przewalski's horses. They are the last surviving type of wild horse, once declared extinct in the wild. A recent study shows they are the closest relatives to domestic horses.
(Image: © Patricia D Moehlman/IUCN)

When a horse gallops, there is a moment when all its feet leave the ground — the moment of suspension. Scientists digging for fossils in the permafrost of Canada's Yukon Territory happened across a different moment of suspension: a 700,000-year-old bone of an ancient colt, suspended and frozen in time beneath the ground.

Luckily for the scientists, this icy grave kept the bone's proteins and DNA remarkably well-preserved. So well-preserved that the researchers were able to sequence its entire trove of genetic information, which has already begun shedding light on how horses evolved and how they are related to zebras, donkeys, and the Przewalski's horse — the last surviving type of wild horse.

When researchers first found the leg bone, there were doubtful they'd be able to record its genome, the full collection of genetic information from an individual, said Ludovic Orlando, an evolutionary geneticist at the University of Copenhagen. That's because the oldest previously sequenced genome was about 10 times younger than the horse's. But the scientists pressed on, and tweaked a new method for analyzing genetic information. Eventually, they were able to record the entire genome of the ancient horse, which roamed grasslands found in what is today the Yukon, when temperatures were about the same as they are today or slightly warmer (but the types of plants found were different).  [Animal Genomes: Our 10 Favorites]

The study, published today (June 26) in the journal Nature, dramatically extends the amount of time DNA is known to survive, said Beth Shapiro, a researcher and study co-author at the University of California at Santa Cruz. The fossil bone they found "is a real treasure," Shapiro told LiveScience.

The results show that donkeys, zebras and horses all evolved from a common ancestor about 4 million to 4.5 million years ago, Orlando said — twice as old as previously thought. That means that horses and their ancestors are evolving more slowly than expected — it's more of an evolutionary trot than a canter.

Horses are a model for understanding the evolution of bodily forms, so this result could help tease out how, for example, animals went from having four "toes" to having one hoof, as is the case with horses, Orlando told LiveScience.

The scientists came to these conclusions after comparing the ancient genome with that from another horse that lived 43,000 years ago, as well as the genomes of five domestic horse breeds and the Przewalski's horse.

The study also suggests that the Przewalski's horse (Equus ferus przewalskii) is the last surviving type of wild horse, and in a separate subspecies from all other modern horses (which are in the subspecies Equus ferus caballus). Also known as the Asian wild horses, this animal was declared extinct in the wild in the 1960s but through captive breeding programs was reintroduced through Mongolia and central Asia, Orlando said. Surprisingly, research has shown that the animal maintains a healthy level of genetic diversity, suggesting that conservation efforts are worthwhile, and that the species has a decent chance of survival.

Aside from the Przewalski's horse, the vast diversity of modern horses are members of the same species, but have been differently shaped by human hands. (Many "wild horses," for example, those found in North America, are really just feral horses descended from domesticated horses.)

This study will help unravel how that process has unfolded on a genetic level, said Carles Lalueza-Fox, a researcher at the Institute of Evolutionary Biology in Barcelona who wasn't involved in the study.

"Contrary to other domesticates, where it is rather obvious which traits where primarily selected (more meat, more wool, more milk production, and in all cases, docility), the horse domestication process is rather enigmatic," Fox said in an email. "The genetic findings, obtained by screening selected regions in modern horses as compared to the ancient ones, may indicate the path to domestication in horses, with genes apparently associated to fertility, pigmentation and muscle efficiency."

Researchers are chomping at the bit to further understand how domestication has shaped horses, and what their genetic history can tell us about how climate change has affected their evolution, for example, Shapiro said.