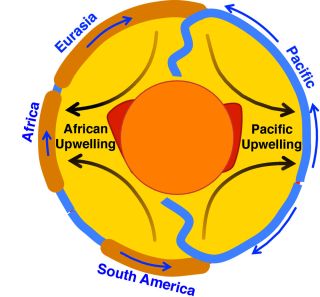 A diagram of large areas of upwelling in the mantle that a 2013 study found may drive the movements of Earth's tectonic plates.
(Image: © © Clint Conrad / University of Hawaii)

Giant fountains of hot rock under central Africa and the central Pacific that have apparently remained stationary for at least 250 million years are helping drive the movements of the massive tectonic plates making up Earth's surface, researchers say.

Below the rocky layer that makes up Earth's outermost skin, known as the lithosphere, is the searing hot rock of the mantle layer. The way this viscous rock flows drives movements in Earth's surface, resulting in the birth and death of supercontinents and the building of mountains when tectonic plates smash together.

Pinpointing what patterns might exist in mantle flow has proved difficult because of uncertainty in how to interpret scans of the inner Earth. Now researchers find they can deduce mantle flow patterns through another route — by looking at the way tectonic plates have drifted over the eons, as this drift is based on how the viscous innards of the planet have flowed.

"This knowledge will help us understand how mantle dynamics affect processes such as mountain-building and volcanism that have shaped our planet over geologic time," researcher Clinton Conrad, a geophysicist at the University of Hawaii at Manoa in Honolulu, told LiveScience's OurAmazingPlanet.

Conrad and his team analyzed past models of the motions of tectonic plates for the past 250 million years, when Earth's landmasses were combined into the supercontinent Pangaea. They next inferred how the mantle should have churned underneath those plates to produce those movements.

The investigators discovered tectonic plates are diverging away from points beneath central Africa and the central Pacific. These points have apparently remained stationary for the past quarter-billion years despite continuing formation and destruction of seafloor and supercontinents at the surface.

"I found it fascinating that the basic flow patterns in such a complicated and obscure place such as the mantle could be so simple and stable over geologic time," Conrad said.

The researchers suggest these points are essentially giant stable upwellings of hot rock that rise up from the lowermost mantle and drive mantle flow and plate tectonics.

"The dynamics of these giant upwellings are not well understood — their stability is thus an interesting feature that helps to define them," Conrad said. "Typically, upwellings in the mantle form very thin 'plumes' that are only a few hundred kilometers across, such as the plume that is thought to be rising beneath Hawaii. Giant plumes, on the other hand, which are thousands of kilometers across, tend not to be as stable as smaller plumes."

Giant upwellings apparently result from the interactions of two different materials in the mantle — "a dense one below and a lighter one above," Conrad said. "Models do not typically show these upwellings to remain stably positioned, so that is something new."

One factor that might help keep these upwellings stable over long times "is that they may be chemically different than the surrounding mantle — they may be chemically a little bit denser, which keeps them from fully rising to the top of the mantle," Conrad said. However, this requires some as-yet-uncertain mechanism to keep such material separate from the rest of the mantle over millions of years, he said.

Some have speculated the location of these upwellings might have something to do with the rotation of the Earth, which is adjusting itself to position these relatively dense spots on its equator, much like how tightrope walkers might hold their arms out to keep more stable.

"However, the details of this have not been well worked out yet," Conrad said.

Incidentally, the so-called plate tectonic dipole, "the one point on the Earth toward which all the plates are on average converging, happens to be in North Korea!" Conrad wrote in an email.

In the future, Conrad and his colleagues would like to peer even further back in time, "to 500 million years or so," he said, to see if the upwellings were in place then as well.

The scientists detailed their findings in the June 27 issue of the journal Nature.