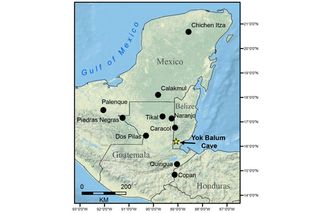 You think you have interesting work, and indeed you may, but chances are it doesn't involve hieroglyphs, fieldwork at a Belize geological site, a 2,000-year-old stalagmite or coordinating a team of diverse experts across oceans to help solve a centuries-old mystery that may hold important lessons for us today.

But if this work, which is that of environmental archaeologist Douglas Kennett, sounds a little bit like Indiana Jones, it is in fact, often a slog. For his late 2012 published research related to the role of climate in the collapse of the Classic Maya (300 to 1000 C.E.), his team extracted and analyzed thousands of samples from a 2,000-year-old stalagmite.

"It was intensive, intensive work," says the Penn State professor. "In my lab there were students drilling samples 20 to 30 hours a week for a year."

The students were drilling tiny trenches in a stalagmite Kennett's team harvested along with nine others in the Yok Balum cave in Belize. Stalagmites form when water drips onto cave floors and leaves mineral deposits, which build up over time into rock towers. The stalagmite used for Kennett's study was about 2 feet (56 cm) long and had grown in a spot 55 yards (50 m) or so inside the cave. Extracting it and nine others like it was not easy. Stalagmites are very solid and heavy, and the researchers had to carry their specimens by light of headlamp, through narrow, craggy passages. What's more, the team was working in a part of the cave that hadn't yet been mapped. [Images: Amazing Caves Around the World]

Stalagmites have stories to tell, with chemical signatures locked inside internal concentric rings. The chemical profiles can provide information about what was happening with the climate at a given time. For example, traces of a relatively rare, heavier oxygen isotope suggest drier conditions. (Isotopes are variants of chemical elements — they have the same number of protons and electrons, but their neutron numbers vary.) Kennett's team used uranium-thorium dating to determine the stalagmite's age and that it had grown continuously for 2,000 years, i.e., without interruptions due to non-climate environmental factors, which would have distorted the climate record.

Drilling in .1 millimeter increments into a cross-section 50 centimeters (about 20") in length, Kennett's students ultimately delivered 4,000 samples of stalagmite powder. Their process entailed drilling the trench, carefully using a flat edge to collect the powder sample and tip it into a vial, and just as carefully marking the vial with accurate and thorough data. Then, the students used compressed air to thoroughly clean the cross-section surface before the next drilling. It was slow and tedious work.

But it yielded great results. The analysis of early samples came out "in much more spectacular fashion than I ever envisioned," said Kennett. A research partner, the Swiss Technological Institute, stepped in to analyze the remaining samples. In the end, Kennett's team had an annual rainfall record (showing "wet" and "dry" cycles) for a 2,000-year period. The group had produced the most detailed view to date of climate trends during the period of Classic Maya collapse. Scientists had debated the role of climate in the demise of the Classic Mayans; now, here was evidence that climate might very well have played a significant role.

The evidence showed that the deterioration of this complex civilization coincided with a decades-long drought after a period of prosperity, which itself had been enabled by a long period of high rainfall.

"The main finding was that a prolonged drought contributed to the collapse of Classic Mayan civilization," Kennett says. "But the story isn't complete without recognizing the preceding period of high rainfall, which was followed by a population expansion and proliferation of political centers."

How did the researchers know what was going on socially and politically at the time? They relied in part on the work of anthropological linguist Martha Macri, a specialist in hieroglyphs who has been studying and translating hieroglyphs inscribed on Mayan monuments for decades and directs the Maya Hieroglyphic Database Project at the University of California, Davis.

Kennett's team used the hieroglyphic database to quantify three types of events that signal political instability — war, events related to war (e.g., taking war captives) and the rate at which Mayan rulers commissioned new monuments (Monuments were built to honor new rulers, royal marriages, etc.). The "war index" showed that increased status rivalry, shifting strategic alliances and more battles tended to follow periods of drought. The big picture showed that the entire trajectory toward collapse occurred during a drying of the Mayans' world. Specifically, there was a drying trend between 660 and 1000 C.E. and an extended drought between 1020 and 1100 C.E. [10 Weird Ways Weather Changed History]

"You can think about it almost as a trap. For 200-300 years there were conditions that promoted expansion of the population ... [Then] you see a gradual downturn towards drought that started stressing the complex system," Kennett said. "And that's where warfare indices come in. Some of the most remarkable amounts of writing come towards the end of the Classical period. ... The society was already in decline and it was stressed further by a gradual drying trend. Then at the end, there were several dramatic droughts."

Kennett and his colleagues see relevance to their study in a 16th-century drought that occurred in the upper Yucatan and discussed it in their paper. "Historical accounts link this [16th-century] drought to reduced agricultural productivity, famine, disease, death and population relocation," they wrote.

"Some estimates suggest that drought-related agricultural disaster caused nearly a million deaths in Mexico in 1535 C.E." The chain of events in Mexico provides a historic analog to the events in and around Belize, the researchers argue. This will be an area for future study, Kennett said, along with studies that can shed more light on how relevant the Belize stalagmite findings are for the Mayan lowlands in general.

Kennett and his colleagues theorize that shifts in climate related to the Mayan collapse may have been driven by the migration of the Intertropical Convergence Zone — a broad band of low pressure near the equator — along with changes in El Nino frequency.

It turns out that solving a 2,000-year old mystery can take the concerted efforts of many experts. The Yok Balum paper, published in Science in November 2012, had 18 authors. In all there were 25 or so researchers involved, Kennett said, plus their students, from nine institutions.

It wasn't always easy to coordinate and manage the work, schedules and agendas of a large and geographically widespread team, he said. But the clear upside is that there are so many scientists available to build upon the Yok Balum data and earlier datasets.

"In the Maya region there is a lot of opportunity to integrate records," Kennett says. "Because there have been a large number of long-term archaeological projects at many Maya cities ... there is a lot of data to start with."

The Yok Balum study has assumed a life of its own, with several researchers taking the investigation in new directions or using the data to inform their own studies, Kennett says. For example, James Baldini of Durham University in England incorporated the data into his five-year study, the HURRICANE Project, which seeks to build a detailed picture of Atlantic hurricanes over the last 500 years, as a way to help predict future hurricane activity in our own changing climate.

And in April, Kennett had a paper published in Nature Scientific Reports linking the Maya Long Count calendar with the European calendar, based on a study using carbon-14 dating of carved wooden door beams from the Maya city of Tikal in Guatemala.

Mainstream news outlets and the blogosphere took notice of Kennett's study when Science published it in November 2012. As you may recall, the Mayans were on people's minds around that time; it was hard to escape talk of predictions — supposedly based on the Mayan Long Count calendar — that the world would experience cataclysmic change on Dec. 21. But climate change is a source of more enduring anxiety and it is most significant that Kennett's research findings seemed to offer obvious parallels to our own climate crisis.

"There are cautionary tales there," Kennett said. "The Maya are not us. We have a much more complicated situation. If someone were a climate change denier, he would say, 'The Maya are completely different, we have technologies the Maya could never have imagined and we can more easily adapt.' And to a certain degree, that's true. But the interaction and articulation between the social and economic processes on the ground and environmental and climatic processes — looking at those relationships is valuable.

"You had people living in Maya region that were living day-by-day within the context of changing climatic conditions and trying to make decisions about when and how much to plant. This was difficult as climatic conditions changed at the end of the Classic Period. And that had major sociopolitical repercussions."

That's the lesson that is valuable for us today, he says.