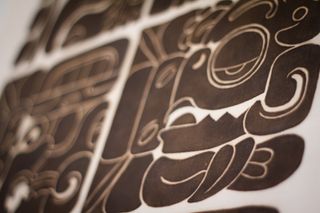 This silkscreen shows dates in the Maya Long Count Calendar and a sacred calendar called the Tzolk'in. The silkscreen is based on carvings found in Quirigua, Guatemala.
(Image: © Andrea Dailey at Longwood University)

The Mayan apocalypse may have been a bust, but a century-old understanding of the calendar that spawned the doomsday rumors appears to be right on.

In a new study, scientists used modern methods to double-check the match between the Mayan Long Count calendar and the modern European calendar. Understanding how the two coincide is important, because research on the rise and fall of the Maya suggests that climate change spelled their doom. To be certain of that link, however, researchers have to be able to match carved Mayan historical records with dates in the modern calendar.

Linking the two calendars is no picnic. The Long Count calendar is essentially a cyclical count of days, known as k'in. The k'in are counted in 20-day cycles called winal or uinal, which in turn are catalogued in 360-day cycles called tuns. Twenty tuns make a 7,200-day k'atun (about 20 years), and 20 k'atuns then make a b'ak'tun. [Images: Mayan Calendar Carvings]

This base-20 Long Count calendar fell into disuse in the Mayan empire before Spanish explorers arrived in South and Central America in the 1500s. That means there are few historical records that can be used to link the Long Count with European methods of tracking time.

In 1905, a researcher named Joseph Goodman proposed a conversion formula, later added to by other researchers and renamed the Goodman-Martinez-Thompson (GMT) correlation. The GMT correlation is based on a few historical texts as well as astronomical data. In 1960, University of Pennsylvania researchers carried out radiocarbon dating of two wooden lintels from Tikal, Guatemala, a major Mayan city. The dating uses isotopes, or molecular variations, in organic material to determine age. In this case, it seemed to confirm the GMT correlation.

But dating technology has come a long way in five decades, and Pennsylvania State University archaeologist Douglas Kennett wanted to be sure the dates were accurate.

"When looking at how climate affects the rise and fall of the Maya, I began to question how accurately the two calendars correlated using those methods," Kennett said in a statement.

To find out, Kennett and his colleagues re-radiocarbon dated a lintel beam previously supposed to be carved sometime between A.D. 695 and 712. They used the tree rings still visible in the carved wood as well as carbon isotopes to determine the beam's age.

The analysis pegged the lintel's carving at around A.D. 658-696, an overlap that backs up the original GMT correlation estimates. The two estimates are even more likely to match up when you consider that 10 to 15 years of wood growth were likely removed from the lintel during carving, the researchers wrote today (April 11) in the journal Scientific Reports.

This particular lintel carving celebrates the defeat of Tick'aak K'ahk', king of the nearby city of Calakmul, by Tikal's leader Jasaw Chan K'awiil. The new study confirms previous suspicions that this victory occurred in A.D. 695, 13 years after Jasaw Chan K'awiil ascended to the throne.

"These events and those recorded at cities throughout the Maya lowlands can now be harmonized with greater assurance to other environmental, climatic and archaeological datasets," the researchers wrote, adding that the confirmation further supports the theory that climate change and drought contributed to the Maya's rise and fall.