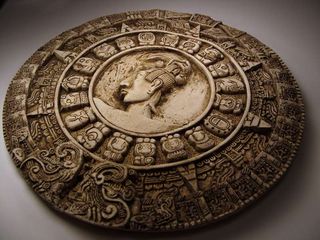 The Mayan Long Count Calendar, which did not predict a doomsday, included dates written out as five hieroglyphs separated by four periods.
(Image: © Hannah Gleghorn | Shutterstock)

It's not as confusing as it might seem. The ancient Maya kept time in a very different way than we do today, and their hieroglyph-heavy calendar can seem daunting at first glance. But the basic principle is simply that the Maya were counting the days.

"That's somewhat different from our own calendar, which is really tied to the length of the solar year," said Walter Witschey, an archaeologist and Maya expert at Longwood University in Virginia.

The first thing to understand is that the Maya used three different calendars. The first was the sacred calendar, or Tzolk'in, which lasted 260 days and then started over again, just as our 365-day calendar refreshes once it hits Dec. 31. This calendar was important for scheduling religious ceremonies.

The second calendar was the Haab', or secular calendar, which lasted 365 days but did not account for the extra quarter-day it takes the Earth to revolve around the sun. (The modern calendar accounts for this fraction by adding a day to February every four years, the reason we have leap years.) That means the calendar wandered a bit in relation to the seasons.

The final calendar was the Long Count Calendar — the recording method that has caused all of the doomsday brouhaha of 2012. On Dec. 21 (approximately), the calendar completes a major cycle, which has triggered doomsday fears and mystical rumors about the end of an age. [Full Coverage: The Mayan Apocalypse (Not)]

The Maya shared our culture's fascination with calendar mile-markers and would have likely considered the date important, Witschey told LiveScience. But they did not make any doomsday predictions about the date. The only two carvings ever found referring to the date depict contemporary kings and their predicted long-lasting legacies, Witschey said.

"Suppose I said to you that George Washington is so important that we will still consider him a revered national leader in the year 3000," Witschey said. "So now you've got the rollover of the zeros, you've got an important contemporaneous figure, and you're looking forward to the future." That's what the Mayan carvings are trying to accomplish, he said.

How the Long Count Calendar works

The Long Count Calendar may not predict doomsday, but it is good at covering long periods of time. Here's how it works: Dates are written out as five numbers separated by four periods, such as 13.0.0.0.0. (The ancient Maya represented these not with numerals, of course, but with their own hieroglyphs.)

The uinals count upward as well. While the Maya generally use a base-20 counting system, Witschey said, they modify this slightly for the uinal, which only counts up to 17 before rolling over to the third position, the tun. Each tun is thus 18 blocks of 20 days, or 360 days — approximately a year by the solar calendar.

Each b'ak'tun is 144,000 days long, or a little less than 400 years. To the ancient Maya, 13 b'ak'tuns represented a full cycle of creation; one carving refers to a god associated with calendar changes returning that day. There are no apocalyptic prophecies, however. In fact, the Maya had several rarely used units that were even larger than b'ak'tuns, giving them the capacity to count millions of years into the future, Witschey said.

"That, actually, is one of the lines of evidence that they didn't think their world was ending at 13.0.0.0.0," Witschey said.

Another hiccup for Mayan doomsday believers: Although many scholars agree that Dec. 21 is the proper date on our calendar matching the end of the 13th b'ak'tun, there is some uncertainty over this, because some Mayan calendar units may have clicked over at sunset and others at sunrise. Some researchers have suggested that Dec. 23 or 24 may be a more accurate fit, Witschey said. Either way, however, the Maya would not have been running for their doomsday bunkers.

"You'll get up in the morning and go forward, and the Maya cycles will have clicked over another day," Witschey said.