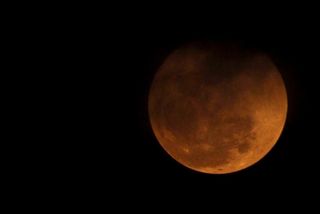 Supermoon as seen from the Philippines.
(Image: © @ aotinio | Shutterstock)

The full moon that will rise Sunday (June 23) will be the largest of the year, a "supermoon" caused by the slightly asymmetrical orbit of the moon around Earth.

A supermoon is a full moon that happens within 12 hours of the lunar perigree, or the point in the lunar orbit that brings the moon closest to Earth. The moon's orbit is slightly elliptical; at its closest approach, the moon is 225,622 miles (363,104 kilometers) from Earth. At its farthest, the moon is 252,088 miles (405,696 km) away.

The nearest full moon appears about 14 percent larger and 30 percent brighter than the full moon at its farthest point from the planet. But despite folklore to the contrary, the supermoon is not responsible for natural disasters, babies being born or people going mad.  [Infographic: Science of the Supermoon]

Traditionally, the full moon of June is known as the Full Strawberry Moon, because June is strawberry-harvesting season, according to the Farmer's Almanac. (In Europe, June's full moon was traditionally known as the Rose Moon).

The 2013 supermoon also comes in close conjunction with another astronomical event, the summer solstice, the official beginning of summer in the Northern Hemisphere and the longest day of the year. This year's summer solstice is on Friday, June 21, at 1:04 a.m. EDT, the moment the sun reaches its farthest point north of the equator. For those in Mountain and Pacific Daylight Time, the moment of the solstice occurs late Thursday, June 20.

The supermoon gets blamed for all manner of worldly happenings, from the sinking of the Titanic to Japan's earthquake and tsunami of 2011. But Earth science experts say linking geological events to the full moon is foolish. The gravitational changes created by a few tens of thousands of miles of difference in distance between the moon and Earth aren't enough to alter tectonic forces in any meaningful way.

"A lot of studies have been done on this kind of thing by USGS scientists and others," said John Bellini, a geophysicist at the U.S. Geological Survey told LiveScience last year. "They haven't found anything significant at all."

Nor have studies turned up evidence that the moon affects human health and behavior. A 1985 review of research published in the journal Psychological Bulletin found no convincing evidence that full moons spur mental hospital admission uptakes, psychiatric disturbances, homicides or other crimes. A 2010 study similarly found a lack of excess criminal lunacy on full-moon days.

Pregnant women hoping the supermoon will trigger labor shouldn't hold their breath, either. Despite traditional beliefs linking the moon with fertility, a 2001 study of 20 years of live births in the United States (about 70 million babies) found no moon-related patterns to when babies were born. The findings were published in the Bulletin of the American Astronomical Society.