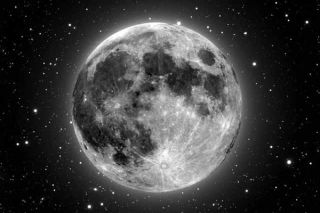 An enhanced image of the Moon taken with the NOAO Mosaic CCD camera using two NSF telescopes at Kitt Peak National Observatory. The Moon is superimposed on a separate image of the sky.
(Image: © NOAO/AURA/NSF)

With the so-called supermoon upon us, as our only natural satellite makes its largest appearance Saturday (March 19) in more than 18 years, should we expect any lunacy?

For centuries legend has held that full moons make people go crazy. Full moons have been linked in popular culture with a rise in suicides and even epileptic seizures, but there's little to no scientific evidence backing these ideas up. [Learn more about the full moon  and the "supermoon"]

However, the moon is a powerful body, its gravity tugging on our oceans to control tides, and its light thought to impact ancient animal behaviors, including the start of one of the largest sex events on Earth (the spawning of corals).

Here's what we do know about the moon's effects, and non-effects, on you and the Earth.

Soaring seizures? After hearing patients claim that their seizures were triggered or worsened by the full moon, Dr. Selim Benbadisof the University of South Florida College of Medicine decided to investigate. In research published in 2004 in the journal Epilepsy & Behavior, he detailed a statistical analysis of 770 seizures recorded over three years at Tampa General Hospital. He found that most epileptic seizures (152) were recorded during the moon's last quarter, while decreasing to their lowest number (94) during the full moon. [Photos: Our Changing Moon]

General lunacy: In a review article entitled "Much Ado About the Full Moon," James Rotton of Florida International University and Ivan Kelly of the University of Saskatchewan reviewed 37 studies on links between the phase of the moon (and other lunar factors) and several types of lunacy, including mental hospital admissions, psychiatric disturbances, crisis calls, homicides and other criminal offenses. This meta-analysis, published in 1985 in the journal Psychological Bulletin, found very few statistically significant relationships between the moon and human behavior.

Those studies that do find links, Rotton and Kelly said, are inaccurate, either because they don't take important factors into account (that are responsible for the "lunacy") or they mistake chance events as proof of a lunar effect.

Sleep deprivation: Before modern lighting, the moon played a larger role in people's sleep-wake cycles, and so the light of a full moon may have kept people up at night, leading to sleep deprivation that could have caused other psychological issues, according to one hypothesis detailed in 1999 in the Journal of Affective Disorders.

Deviant behaviors: A 2010 study using police, astronomical, and weather data from San Antonio, Texas, found no link to support popular lore that has suggested lunar phase influences the volume of crime reported to the police. The study was published in the Journal of Criminal Justice.

Pet injuries: A 2007 study of nearly 12,000 pet-injury cases at the Colorado State University Veterinary Medical Center revealed emergency-room visits were 23 percent higher for cats and 28 percent higher for dogs on days around the full moon. The culprit: While the study, published in the Journal of the American Veterinary Medical Association, didn't determine a cause, the researchers speculate more people may be out and about with their pets due to the increased light during the full moon, which would raise the odds of pet injuries.

Surgery outcomes: A study published in 2009 in the journal Anesthesiology showed the moon's phase has no effect on the outcome of a heart-related surgery. The results are based on an investigation into surgical outcomes of more than 18,000 patients who underwent so-called elective coronary artery bypass graft surgery, in which blood flow is rerouted through a new artery or vein. The operations were performed at the Cleveland Clinic between 1993 and 2006.

In nature, the moon is nothing to scoff at. Animals time routine activities around the light, and the oceans' tides depend on it.

Even though our bodies are about up to more than 60 percent water, the difference in the moon's pull on one side of our body compared to the other is much too small to have an impact.

As for animals, the moon does show some effects.

For instance, a few nights each year, after the full moon, hundreds of species of reef-building corals spawn synchronously, releasing their eggs and sperm into the water in one of the biggest moonlight sex events on Earth. Research published in 2007 in the journal Science reveals that in at least in one type of coral called Acropora millepora a light-sensitive gene may be key. This gene seems to be most active during full-moon nights.

And creatures called Azara's owl monkeys, which prowl the forests of Argentina after dark, are more active on full-moon nights, according to a study published in 2010 in the journal PloS ONE. The researchers also found that the morning after those full moons, the tuckered-out monkeys often slept in.

When the moon was new (and so not visible from Earth), however, monkeys hunkered down for the night and waited for morning before moving about. During three lunar eclipses (when the moon moves into the Earth's shadow) during the course of the study, the monkeys also stayed put.

There is evidence that prey are less active during full moons, when the extra light could make them easy pickings for predators. To see if predators follow suit, researchers tracked three wild wolves during full and new moons over four lunar cycles. And indeed, the wolves traveled significantly less during the full compared with the new moons, according to the research detailed in 2006 in the journal Behavioral Processes.