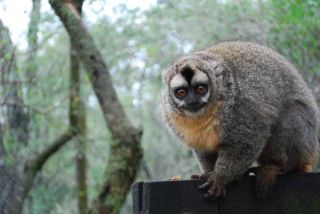 Monkeys that prowl the forests of Argentina after dark prefer the light of the full moon, according to a new study. The findings suggest that for some nocturnal monkeys, moonlight trumps their internal biological clock for setting sleep schedules.

Owl monkeys in Central and South America are the only primates to stick to strict nocturnal patterns. But one type of owl monkey, the Azara's owl monkey, can switch from a nocturnal schedule to one that includes activity during the day and night.

To find out what triggers the Azara's owl monkey's strange schedule, researchers fitted wild monkeys with collars that would record when they were active. They then monitored the monkeys for up to 18 months.

They learned that the monkeys much preferred warmth and light over cold and darkness. Nocturnal activity was more common during the warm months of September to March than during colder months. On nights when the full moon rose, monkey activity peaked; the next morning, the worn-out monkeys often slept in. When the moon was new (and so not visible from Earth), however, monkeys hunkered down for the night and waited for morning before moving about. During three lunar eclipses (when the moon moves into the Earth's shadow) during the course of the study, the monkeys also stayed put.

The reason for the monkeys' increased activity seems to be the extra light put out by the full moon, rather than any sort of mystical lunar force. Studies have failed to find any widespread effects of the full moon on humans and animals, despite many full moon folk myths.

The findings suggest that environmental factors are as important to the primates as their internal biological clock. According to the researchers, this study provides the first long-term evidence that factors like temperature and light matter for primates' sleep schedules in the wild.

"If there was a biological clock that they were depending on to regulate this activity, you could expect the activity to continue even in the absence of lunar light," said study researcher Horacio de la Iglesia of the Department of Biology at the University of Washington.

The findings are detailed in the current issue of the journal PLoS ONE.