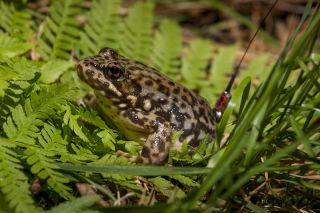 In a boost to California's endangered amphibians, researchers released about 100 mountain yellow-legged froglets into the wild this week.

The diminutive frogs were bred and raised in captivity for a year before they were released on Wednesday (June 12) into a creek at the James San Jacinto Mountains Reserve. This is the first time frogs of this species have been reintroduced into the wild, said researcher Frank Santana, of the San Diego Zoo Institute for Conservation Research.

"Right away, they were exhibiting natural behaviors," Santana said in a video from the San Diego Zoo."They swam away, they did these natural anti-predator-behaviors, they went to the bottom of the pool to try to blend in with the substrate … I think they're well positioned to survive."

Some of the frogs were outfitted with radio telemetry backpacks, which will allow researchers to pinpoint the animals' location and track their wellbeing, Santana added.

The frogs once thrived in streams in parts of the San Gabriel, San Bernardino and San Jacinto mountains in Southern California, but they experienced a precipitous decline over the last several decades; by 2003, there were estimated to be fewer than 200 individuals.

Mountain yellow-legged frogs (Rana muscosa) are listed as endangered by the U.S. Fish and Wildlife Service, and they continue to face environmental threats, including predatory trout introduced to their habitats and the deadly fungal infection chytridiomycosis, which has devastated amphibian populations worldwide.