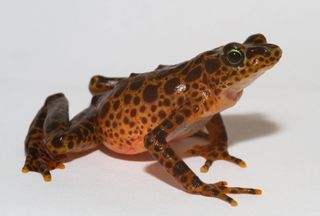 The deadly frog fungus that has wiped out amphibian species across the globe may be contained with several innovative strategies, according to scientists who reviewed the effectiveness of all available strategies.

However, the researchers warn it is still too soon to recommend the treatments, as the fungus may develop a resistance to them.

Just over the past 30 years, the rapidly spreading fungal infection has caused the decline or extinction of about 200 species of amphibians, according to the U.S. Fish and Wildlife Service. The fungus is called Batrachochytrium dendrobatidis, and leads to the disease chytridiomycosis, which kills frogs by causing severe disruptions in their skin functions.

An international group of researchers is studying various techniques to prevent the effects of the disease and curb potential future extinctions. Until recently, the only effective way of tackling the disease was to establish captive colonies of frog species that were at the greatest risk of becoming extinct.

One of the new techniques is a thermal treatment that has shown success in pilot studies. The treatment involves keeping infected tadpoles in captivity at temperatures of over 69.8 degrees Fahrenheit (21 degrees Celsius), which is hotter than that of their normal environment. The tadpoles are kept under these conditions until they undergo metamorphosis and become adult frogs. At that point, they are released into their natural habitat, even though some of the frogs may still test positive for the disease.

In a similar treatment, scientists have tried giving infected frogs baths in the antifungal itraconazole for eight consecutive days. The agent works by slowing the growth of fungi that cause infection; since 2009, the number of these frogs surviving infection has increased.

However, researchers are hesitant to encourage the widespread use of the new methods just yet, since the re-infection of treated amphibians is possible with both treatments, according to the study.

The scientists concluded that these and other new strategies "could be enough to prevent outbreaks of the disease and could, therefore, largely prevent local extinctions," study researcher Jaime Bosch of the National Natural Sciences Museum in Spain said in a statement.

The findings were recently published in the journal Frontiers in Zoology.