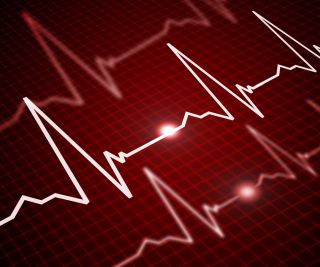 The data come from a review of seven studies that looked at various heart measures following consumption of one to three energy drinks. Among the concerning findings, researchers said, were slightly elevated blood pressure, and a lengthening of one phase in the heart's rhythm, called the QT.

"Certain individuals need to be careful," said Sachin Shah, an assistant professor of pharmacy at the University of the Pacific in Stockton, Calif. "I'm worried about the chronic [energy] drinkers, because that degree of increase in systolic blood pressure can have consequences."

In the study, researchers found that after drinking one to three energy drinks, people's systolic blood pressure was raised by 3.5 points on average, and the QT phase of heartbeat was lengthened by 10 milliseconds. But there was a wide range on those measures —  some people saw little change, while others may need to consider what they drink, the researchers said.

Shah said people who otherwise drink little or no caffeine (which is found at high levels in energy drinks), and those with known heart issues may be at risk for health problems, as well as those who consume energy drinks frequently.

The longer QT phase might also be of some concern, because energy drinks have been linked to problems in people who, for genetic reasons, already have a longer phase.

The lengthening of the QT that was seen in the study could theoretically produce an irregular heartbeat, especially in a person with another heart problem, Dr. Gordon Tomaselli, past president of the American Heart Association and director of cardiology at Johns Hopkins, said in a statement about the study[JB1] .

But the data are still preliminary, and should be further studied, Tomaselli said.

In past research, other investigators have observed that looking at the data on energy drink consumption and ER visits is complicated by the fact that many young adults combine energy drinks with alcohol, potentially exacerbating any side effects.

"That is a very significant issue and that needs to be explored," Shah said. "In my personal opinion, that is something that might be driving some of the increased emergency room visits."

There isn't enough data in the new study to comment on how combining alcohol and energy drinks might be creating problems, he said. "We need more data to answer that question."

In response to the study, the American Beverage Association, which represents a number of energy drink producers released a statement, saying "Neither this abstract, nor the body of scientific evidence, suggests that energy drinks – most of which contain about half the caffeine of a similarly-sized coffeehouse coffee – cause adverse health outcomes."