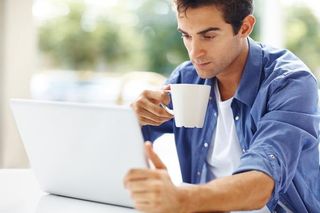 You'd probably rather not think about it, but there are hundreds of species of bacteria on your desk, according researchers who sampled offices in three U.S. cities.

The study identified at least 500 species of bacteria in the offices, and found that men's offices tended to be germier than women's.

And although offices in New York City and San Francisco had similar types of bacteria, those in the Golden State were less contaminated than those in the Big Apple, the researchers said.

But don't go running for the hand sanitizer just yet — although the findings have an "ick" factor, bacteria in your office are not necessarily something to worry about, the researchers said. After all, many bacteria are harmless, and actually help maintain human health.

"You shouldn't be worried in your own office — it's you; it's just a reflection of who you are," said study researcher Scott Kelley, an associate professor of biology at San Diego State University, referring to the bacteria you find on your typical desk or keyboard. These bacteria are "with us all the time, and they don’t make us sick," he said.

Rather, the researchers said they hope that by documenting the various bacteria present in buildings with generally healthy people, scientists will be able to spot out-of-the norm bacteria that cause health problems, Kelley said. Such bacteria might turn up when something in the building changes, such as the air vents, he said.

Although we spend about 90 percent of our lives indoors, surprisingly little is known about the diversity of bacteria in environments such as offices, Kelley said, including how much is there and where it comes from.

Kelley and colleagues sampled a total of 90 offices from buildings in New York City, San Francisco and Tucson, Ariz. The researchers swabbed employees' chairs, phones, desktops, computer mice and keyboards. They analyzed the bacterial DNA to identify the types and amounts of bacteria present.

Most of the bacteria they found came from human skin or the nasal, oral or intestinal cavities, the researchers said. Bacteria from soils were also common, Kelley said.

Although you might expect the computer to be a germ magnet, more bacteria were found on office chairs and phones than on keyboards and computer mice, the researchers said.

Men had about 10 to 20 percent more bacteria in their offices, on average, compared with women.

This may be because men, research finds, tend to be less hygienic. "Men are known to wash their hands and brush their teeth less frequently than women, and are commonly perceived to have more slovenly nature," the researchers wrote in the May 30 issue of the journal PLoS ONE.

In addition, men are typically larger than women, and thus have a greater surface area for bacteria to live in and shed from, the researchers said.

New York City offices were the germiest, and those in San Francisco were the cleanest in terms of bacteria quantities. However, more buildings would need to be sampled before conclusions could be drawn about whether this is a typical pattern for offices in these regions, and what might be causing these differences, Kelley said.

While similar types of bacteria were found in New York and San Francisco, samples from Tucson looked different, possibility because the southern city has a different climate. Samples from Tucson tended to have fewer bacteria from the groups called Bacteroidetes and Cyanobacteria compared with the other two cities.

The researchers next plan to look at the types of molds present in offices, Kelley said.

The study was funded in part by Clorox Corporation; the cleaning product manufacturer had no role in study design, data collection or analysis.

Pass it on: Men's offices tend to be germier than women's, a new study finds.