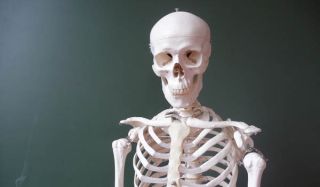 The hormone osteocalcin, made by the bones, increases testosterone production and can improve fertility in male mice, according to a new study.

Osteocalcin boosts male fertility because it "favors the expression of all the genes needed to synthesize testosterone," Karsenty told MyHealthNewsDaily.

And the more testosterone a male has, the higher his sperm count generally is, he said.

The study was published online today (Feb. 17) in the journal Cell.

Karsenty and his colleagues injected osteocalcin into male mice that had been engineered to lack it, and found their levels of testosterone increased.

And when the male mice deficient in osteocalcin bred with normal female mice, they produced half as many litters as normal males did, the study said.

It's also important to note that osteocalcin doesn't directly impact male fertility, it only changes testosterone levels, said Dr. Natan Bar-Chama, director of the Center of Male Reproductive Medicine at Mount Sinai Medical Center in New York, who was not involved with the study.

A new way of looking at testosterone

Past studies have shown that testosterone can increase bone mineral density, and low testosterone has been linked with an increased risk of osteoporosis and bone fractures.

But now, "it's the reverse you're saying bones help testosterone," said Dr. Mohit Khera, an assistant professor of urology and director of the Laboratory for Sexual Medicine at Baylor College of Medicine in Houston, who was not involved with the study.

"It's a completely different way of thinking than we've been used to," Khera said.

But Khera cautioned that this study does not show that taking testosterone supplements can increase male fertility. Although testosterone made naturally by the body increases fertility, extra doses of it actually decrease fertility, he said.

"I couldn't imagine having to synthesize this hormone and pull it out of the body, and at this point it doesn't seem not be cost-effective," Khera told MyHealthNewsDaily.

But the finding does give new insight into human physiology and helps us to understand the relationship between bone health and fertility, he said.

Pass it on: Osteocalcin, a compound produced by the bones, increases testosterone in male mice. With more testosterone, the mice were able to produce more sperm and breed more than mice without osteocalcin.