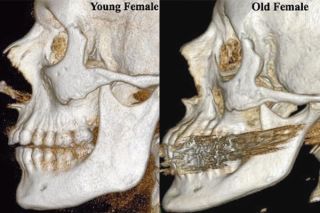 As years pass, facial bones lose volume, contributing to the appearance of aging. Here, CT images show the skull of a woman between the ages of 20 and 40 (left) and the skull of a woman over 65 (right). The bones of the older female show that her eye socket is larger, the angle of her lower jaw bone has dropped and the angle of her brow is reduced.
(Image: © Howard Langstein/University of Rochester Medical Center.)

Getting rid of facial wrinkles may not be enough to obscure the signs of aging. For a truly youthful look, you'd have to reshape the bones in your face, a study says.

Plastic surgeons may be experts at dealing with age-related changes to the skin and soft tissues, but to make people look younger, they must better understand how alterations to our underlying facial bones contribute to our aged appearance , the researchers wrote in the January issue of the journal Plastic and Reconstructive Surgery.

As we grow older, our facial bones including our eye sockets, nose and upper jaw continue to change. For example, our eye sockets enlarge, and the angle of the bones beneath our eyebrows decreases which could contribute to the formation of frown lines on our foreheads, "crow's feet" at the corners of our eyes and droopy lower eyelids, the researchers say. [Images: See pictures showing the differences between a young and an old woman's facial bones]

The researchers analyzed computed tomography scans of the facial bones of young people (age 20 to 40), middle-age people (41 to 64), and older people (65 and up). (All the CT scans had been medically necessary for other reasons not for planning plastic surgery, the researchers said.)

Detailed measurements of three-dimensional reconstructions of the scans revealed some important differences in the facial bone structure between age groups.

"The facial skeleton experiences morphologic change, and an overall decrease in volume, with increasing age," the researchers wrote.

One prominent change was an increase in the area of the eye sockets. In both men and women, the sockets became wider and longer.

Aging also affected the bones of the middle part of the face. The researchers found reductions in the angles of the brow, nose, and upper jaw bones. The length and height of the lower jaw decreased, as well.

By using materials and techniques for skeletal augmentation, plastic surgeons could improve the results of the facial rejuvenations they perform, the researchers said.

Pass it on: The bones of our face change as we age, making us look older.