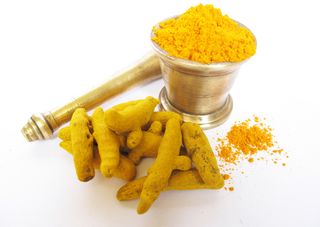 The main component in the spice turmeric, known as curry powder, can add to the power of chemotherapy in suppressing head and neck tumors, a new study suggests.

Researchers at the University of California, Los Angeles, found the chemical compound called curcumin, the main ingredient in turmeric, enhances the effects of the chemotherapy drug cisplatin, which is commonly used to treat head and neck cancers, in addition to radiation. Curcumin has been found to help curb the growth of breast , colon and pancreatic cancers.

But because cisplatin can have toxic side effects, researchers were "looking for an agent that would enhance the effect of cisplatin, allowing the use of lower, less-toxic doses," said study researcher Dr. Marilene Wang, a professor of head and neck surgery at UCLA's Jonsson Cancer Center.

To test the effects, scientists injected curcumin alone, cisplatin alone and a curcumin-cisplatin mixture into the tails of mice with cancerous tumors.

Curcumin is believed to work by suppressing a protein that controls cell growth . When such proteins aren't controlled properly, cancers can develop, grow and spread, Wang said.

Doses of curcumin used in clinical trials are far higher than the amount in foods, Wang told MyHealthNewsDaily, so it's not known if turmeric in food alone can ward off cancer. However, it's possible that continuous intake of curcumin could even in small quantities help prevent cancer.

This study isn't the first to show curcumin may fight cancer.

A study this month in the journal Nutrition and Cancer found curcumin may make tumors more sensitive to chemotherapy drugs, and at the same time, protect the body's organs from the drugs' toxic effects. And a 2008 study in the journal Clinical Cancer Research found curcumin helps to suppress squamous cell carcinoma, a type of skin cancer , in the head and neck.

Aside from its cancer-fighting properties, curcumin has long been used in India to fight the effects of aging, relieve menstrual cramps and promote the healing of wounds, in addition to being used as an additive in cosmetics, said study researcher Eri Srivatsan, adjunct professor of surgery at Jonsson Cancer Center.

Next, the researchers will begin clinical trials to investigate curcumin's effectiveness in cancer patients, when given in combination with chemotherapy drugs .

The study was published in the October issue of the journal Molecular Cancer Therapeutics.