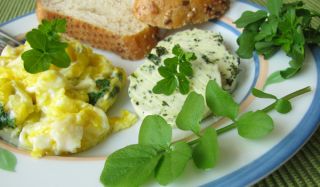 Watercress may be more than just a peppery garnish on your plate or in your salad. A small new study from the Cancer Center of the University of Southampton in the United Kingdom suggests that a compound in this leafy plant may suppress the activity of a protein that is often triggered in cancer cells.

"The research takes an important step toward understanding the health benefits of eating cress," said study researcher Dr. Graham Packard, a molecular oncologist at the university, "since it might interfere with a pathway that has been linked to cancer development."

A research team led by Packard discovered that a sulfur-containing compound called phenylethyl isothiocyanate (PEITC) found in watercress and other cabbage family vegetables may interfere with the function of a protein called hypoxia-inducible factor (HIF), thought to play a critical role in cancer development.

As tumors grow, they send out signals, including HIF, that cause existing blood vessels to grow toward and into the tumor, providing the necessary nutrition for growth.

Eating watercress appeared to cause a significant reduction in the activity of a protein called 4E-BPI in the blood cells of study participants. This is important, the researchers said, because 4E-BPI has been linked to HIF activity in previous trials.

Packard and his colleagues examined blood cells from nine women, all breast cancer survivors who had been free of their disease for at least two years. The women fasted, and then ate a cereal bowl full of watercress. The researchers tested their blood over the following 24 hours.

The researchers found significant levels of PEITC in the women's blood within six to eight hours, and also found 4E-BPI was inactivated. They concluded the chemical in watercress may lower the ability of cells to release the blood vessel-signaling protein. They presented the findings at the Breast Cancer Research Conference in Britain in September.

The study builds on 2007 findings published in the American Journal of Clinical Nutrition, which showed watercress extract may reduce DNA damage to lymphocytes, a type of white blood cell. The scientists also found the compound in watercress may improve the ability of cells to resist damage caused by free radicals.

The study was funded by the Watercress Alliance, composed of Britain's three largest watercress producers. The alliance also funded the 2007 study on DNA damage in lymphocytes.

"Blood cell DNA damage is an indicator of whole-body cancer risk," said study researcher Ian Rowland, a professor at the University of Ulster in Belfast.

Watercress is a member of the cabbage family, which includes broccoli , brussel sprouts, bok choy and many other plants. Besides PEITC, watercress provides vitamins A and C, calcium, B complex vitamins, the antioxidants lutein and zeaxanthin, iodine and fiber, according to the U.S. Department of Agriculture's Food and Nutrition Information Center.