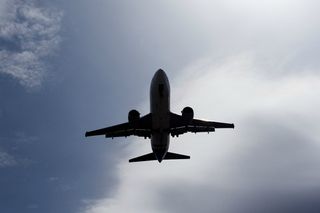 In-flight medical emergencies occur on 1 in every 604 commercial air flights on average, according to a new report.

In most cases, everything turned out fine — of the 11,920 people in the study who suffered an in-flight medical emergency, 25.8 percent were rushed to hospitals, and 8.6 percent were admitted. Of the 36 people who died, 30 deaths occurred during flights (the others died after landing), according to the study of five airlines over a nearly three-year period.

The most common emergencies that arose in-flight were syncope (or feelings of lightheadedness, dizziness or passing out), followed by respiratory problems and nausea and vomiting.

In about half the cases, an onboard physician passenger intervened, and in 7 percent of cases the aircraft had to divert its route.

"The majority of cases were handled by the equipment and medication available onboard," said Dr. Christian Martin-Gill, an assistant professor of emergency medicine at the University of Pittsburgh and a study researcher.

Medical emergencies happen everywhere, but aboard commercial airplanes, there are additional challenges of limited space and equipment, the researchers wrote. An emergency medical kit and a defibrillator are required by the U.S. Federal Aviation Administration on every flight, and many commercial flights communicate with ground-based medical practitioners when emergencies arise.

In the study, the researchers looked at all international and domestic flights on five airlines between January 2008 and October 2011. The names of the airlines are not being published to protect the confidentiality of the patient, the researchers said.

Based on their data, the researchers estimated that 44,000 in-flight medical emergencies happen worldwide yearly. In the study sample, most cases that resulted in death were due to cardiac arrest.

The researchers said they encourage physician passengers and other health providers to assist with in-flight medical emergencies. "There is equipment onboard that they can use, and experts on the ground who would communicate with them, if they ever find themselves in a situation like that," Martin-Gill said.

So are we safe in the air? The researchers concluded that flying is generally safe, in terms of medical emergencies and their outcome. However, people with pre-existing conditions such as chronic lung problems, heart disease and diabetes should be mindful of what they may need when traveling.

"They should always have their medication with them onboard, and discuss with their practitioner whether they might need supplemental oxygen, which can be coordinated with the airline," Martin-Gill said.

The study will appear in tomorrow's (May 30) issue of the New England Journal of Medicine.