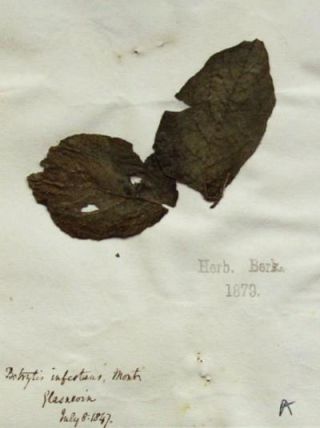 This potato specimen from the Kew Garden herbarium was collected in 1847, during the height of the Irish famine. The legend reads "Botrytis infestans," because it was not yet known that Phytophthora does not belong to the mildew-causing Botrytis fungi.
(Image: © Marco Thines/Senckenberg Gesellschaft für Naturforschung)

The Irish potato famine that caused mass starvation and approximately 1 million deaths in the mid-19th century was triggered by a newly identified strain of potato blight that has been christened "HERB-1," according to a new study.

An international team of molecular biologists studied the historical spread of Phytophthora infestans, a funguslike organism that devastated potato crops and led to the famine in Ireland. The precise strain of the pathogen that caused the devastating outbreak, which lasted from 1845 to 1852, had been unknown.

"We have finally discovered the identity of the exact strain that caused all this havoc," study co-author Hernán Burbano, a researcher at the Max Planck Institute for Developmental Biology in Germany, said in a statement. [Microscopic Worlds Gallery: Fascinating Fungi]

Previously, a Phytophthora strain called US-1 was thought to have triggered the potato famine, but by sequencing the genomes of preserved samples of the plant pathogen, the researchers discovered that a different strain — one that is new to science — was the real culprit.

"Both strains seem to have separated from each other only years before the first major outbreak in Europe," Burbano said.

The researchers studied 11 historic samples from potato leaves that were collected about 150 years ago in Ireland, the United Kingdom, Europe and North America.

The scientists found these ancient samples, which were preserved at the Botanical State Collection Munich and the Kew Gardens in London, still had many intact pieces of DNA. In fact, the DNA quality was so good the researchers were able to sequence the entire genome of Phytophthora infestans and its host, the potato, within just a few weeks.

"The degree of DNA preservation in the herbarium samples really surprised us," study co-author Johannes Krause, a professor of paleogenetics at the University of Tübingen in Germany, said in a statement.

The decoded genomes of these historical samples were then compared with modern Phytophthora strains from Europe, Africa and the Americas. The results enabled the researchers to trace the evolution of the pathogen, including where and when the HERB-1 and US-1 strains likely diverged.

According to the study, Phytophthora infestans originated in Mexico's Toluca Valley. When Europeans and Americans first came to Mexico in the 16th century, the pathogen experienced increased genetic diversity, and in the early 1800s, the HERB-1 Phytophthora strain emerged and was brought out of Mexico, the researchers said.

By the summer of 1845, the HERB-1 strain had arrived at European ports, and the potato disease spread throughout Ireland and the United Kingdom, causing the Irish potato famine. In the 20th century, as new varieties of potatoes were introduced, the HERB-1 strain was eventually replaced by the US-1 Phytophthora strain, the researchers said.

This evolutionary change may have been spurred by the introduction of new crop breeding methods, which suggests that breeding techniques may affect the genetic makeup of plant pathogens.

"Perhaps this strain became extinct when the first resistant potato varieties were bred at the beginning of the 20th century," lead author Kentaro Yoshida, a researcher at The Sainsbury Laboratory in the United Kingdom, said in a statement. "What is for certain is that these findings will greatly help us to understand the dynamics of emerging pathogens."

The new study marks the first time scientists have decoded the genome of a plant pathogen and its host from dried herbarium samples.

"Herbaria represent a rich and untapped source from which we can learn a tremendous amount about the historical distribution of plants and their pests — and also about the history of the people who grew these plants," Yoshida said.

Yoshida and his colleagues report their findings in a paper that was submitted May 17 for publication in the journal eLife.