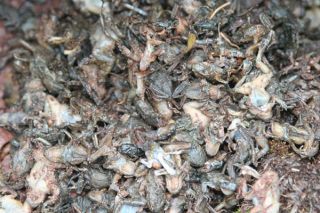 An unprecedented number of diseases caused by fungi have been causing some of the most severe die-offs and extinctions ever witnessed in wild species and jeopardizing crops to boot, scientists now report.

Fungi are wiping out amphibians on several continents, decimating bats in eastern North America, contributing to the disappearance of bees dubbed colony collapse disorder, and killing corals and sea turtles.

They are even threatening humans, if indirectly, by attacking crops. Fungi and fungilike organisms called oomycetes can cause significant losses to rice, wheat, maize, potatoes and soybeans, according to the researchers who write that the problems "vary regionally but pose a current and growing threat to food security."

To determine if fungi are causing more diseases and extinctions among plants and animals, the team, led by Matthew Fisher at the Imperial College London, combed through years of scientific reports.

This technique was tricky because diseases and their effects can be difficult to spot in plants and animals. It is also possible that increasing awareness of disease-causing fungi may have led to more reports, they note. With these caveats, they conclude that the data do support the idea that fungi pose a greater threat to plant and animal biodiversity than other pathogens, and the threat is increasing.

They offer a number of reasons why. When infecting a large, vulnerable population, fungi can spread so quickly that they wipe out the population before the victims become too sparse to limit transmission.

Fungi can also infect a broad spectrum of hosts, although with different degrees of severity. This can lead some, less vulnerable species to become "super spreaders," carrying a disease that can spread to others, according to the team. Some research suggests the Pacific chorus frog may be playing this role in spreading the chytrid fungus that is driving other amphibians to extinction.

Fungi also travel well. Humans have been spreading them for a long time; for instance, the Irish potato famine is believed to have been caused by the import of potato blight from the Americas. The African clawed frog, a carrier of the chytrid fungus, was transported around the world for use in pregnancy tests. And recent evidence indicates that the fungus linked to the white-nose syndrome arrived in a New York cave from Europe.

Fungi's genetic flexibility can help them evolve virulence quickly. Fungi can rapidly acquiring the genetic changes necessary to lead to the creation of new pathogens, and pathogenic lines can clone themselves. Humans help this process along by bringing together fungi that can still exchange genes but were once isolated from one another, the researchers write in the April 12 issue of the journal Nature.

And finally, fungi can also live independently, outside of their hosts. For instance, Geomyces destructans, the cause of white-nose syndrome among bats, lives in soil. Some soil-dwelling Ascomycota fungi can tolerate salty conditions, so once they have drained into marine waters, they can infect corals, sea otters and loggerhead turtle nests. [Wildlife Plagues: Do You Know Them?]

For this reason, fungal pathogens present a very different problem than other microbes that are dependent on a host for replication, according to Arturo Casadevall, chairman of the department of microbiology and immunology at Albert Einstein College of Medicine in New York.

"Some environmental-acquired fungi kill their hosts but do not need them and consequently can drive a species to extinction," Casadevall, who was not involved in the research, told LiveScience in an email. "I agree that fungal threats are increasing and the threat from fungi remains unappreciated by most authorities who are usually focused on known bacterial and viral pathogens."