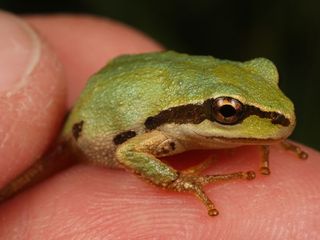 The Pacific chorus frog may be spreading a deadly fungal infection that is wiping out other amphibians around the world.
(Image: © Joyce Gross)

A common West Coast frog, the Pacific chorus frog, may be spreading the deadly fungal infection that is devastating other amphibians, a new study suggests.

Not only did the tiny chorus frogs survive an epidemic of the disease, called chytridiomycosis, that devastated their neighbors—once-abundant mountain yellow-legged frogs —in Sixty Lake Basin in the Sierra Nevada Mountains, tests in the lab found the chorus frogs were able to survive while carrying high loads of the fungus responsible for the disease.

Chytridiomycosis is blamed for serious declines or extinctions in more than 200 amphibian species around the world. The water-dwelling fungus attacks an amphibian's skin, disrupting the animal's ability to transport electrolytes — charged ions such as sodium —and ultimately causing cardiac arrest and death. [7 Devastating Infectious Diseases]

Pacific chorus frogs are common along the Pacific coast from Baja California to British Columbia, and known for their distinctive "ribbit" calls.

"Our findings explain the steady march of chytrid up the mountain," said Natalie Reeder, who conducted the research for her master's thesis at San Francisco State University, in a press release issued by the university. "These frogs can climb mountains and go places that are pretty dry."

Skin swabs taken from the chorus frogs living in the basin where the epidemic occurred over the past decade confirmed the chorus frogs were indeed infected with the chytrid fungus, called Batrachochytrium dendrobatidis or Bd.

The chorus frogs are not the first species to be identified as carriers. The American bullfrog, Rana catesbeiana, and the African clawed frog, Xenopus laevis, (which was used in pregnancy tests) also appear able to live with Bd infections. However, the high levels of the fungus in the chorus frog indicate it might make a more efficient carrier, Reeder and colleagues write in a study published Monday (March 12) in the journal PLoS ONE.

After examining the infected chorus frogs in the lab, the researchers developed a theory as to why the often deadly infection made almost none of them sick.

The infection only attacked patches of the chorus frogs' skin instead of all of it. The pattern of isolated patches might leave most infected chorus frogs with enough normal skin to maintain their electrolyte balance, according to the researchers.