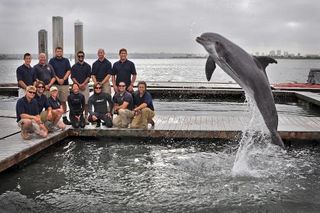 Members of the Space and Naval Warfare Systems Center Pacific Marine Mammal Team pose May 15, 2013, with one of the Navy's specially trained Atlantic bottle-nosed dolphins. The team, along with the dolphin, are responsible for the discovery and recovery of the Howell torpedo.
(Image: © Alan Antczak)

A Navy dolphin training to look for mines off the coast of San Diego found a museum-worthy 19th-century torpedo on the seafloor, military officials said.

The brass-coated, retro wonder of technology was one of the first self-propelled torpedoes used by the U.S. Navy. Just 50 of these so-called Howell torpedoes were made and only one other example has been recovered; it sits in the Naval Undersea Museum in Keyport, Wash., outside of Seattle.

The 130-year-old, 11-foot-long (3.3 meters) weapon was discovered back in March during a mine-hunting exercise that the Space and Naval warfare Systems Center Pacific (SSC Pacific) was conducting with bottlenose dolphins. [Top 10 Animal Recruits in War]

"Dolphins naturally possess the most sophisticated sonar known to man. They can detect mines and other potentially dangerous objects on the ocean floor that are acoustically difficult targets to detect," operations supervisor Braden Duryee, of the SSC Pacific Biosciences Division, said in a statement.

Dolphins use their natural sonar, called echolocation, to determine the size and shape of underwater objects by sending out a series of clicks that bounce off their targets and boomerang back to them. The marine mammals can be trained to report what they have found to human handlers using certain yes or no responses. Handlers can then investigate what the dolphins find by sending the animals to mark an object's location with a weighted buoy line.

In this case, one of the dolphins indicated to its handler that it had detected a minelike target. The recovery dive team initially thought the dolphin had found an old tail section off an aerial drop mine, according to a statement from SSC Pacific, but officials soon realized they were handling a much rarer artifact.

"It was apparent in the first 15 minutes that this was something that was significant and really old," Christian Harris, operations supervisor for the SSC Pacific Biosciences Division, said in a statement. "Realizing that we were the first people to touch it or be around it in over 125 years was really exciting."

The Howell torpedo had a 132-lb (60 kilogram) flywheel that would be spun prior to launch. With a warhead filled with 100 lbs (45 kg) of gun cotton, the weapon had a range of 400 yards and could reach speeds of 25 knots, military officials said.

"It was the first torpedo that could be released into the ocean and follow a track," Harris said. "Considering that it was made before electricity was provided to U.S. households, it was pretty sophisticated for its time."

The torpedo is being kept in a tank of water to prevent erosion on its surface. The historical weapon will eventually be shipped to the Naval History and Heritage Command at the Washington Navy Yard.

Navy officials said last year that the U.S. military may begin retiring its dolphins in 2017 in favor of cheaper mine-hunting robots.

Dolphins' amazing sonar ability can be a blessing and a curse for marine mammal-military relations; the animals are acutely vulnerable to high-powered naval sonar used during military tests, and past naval exercises have been linked to dolphin strandings.