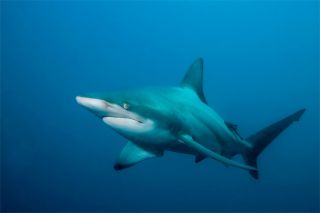 Atlantic blacktip sharks are known to breach out of the water while feeding, sometimes spinning a few times around their axis. The spinning breach could help the sharks vertically attack fish below as they plunge back into the water.
(Image: © Matthew D. Potenski, MDP Photography.)

Shark attacks are on the decline due to the current economic downturn, a biologist speculated today.

In 2008, attacks worldwide dipped to their lowest level in five years, a sign that Americans may be forgoing vacation trips to the beach, said ichthyologist George Burgess of the University of Florida.

Burgess is the director of the International Shark Attack File, a compilation of all known shark attacks that is administered by the American Elasmobranch Society and the Florida Museum of Natural History, on the UF campus.

"I can’t help but think that contributing to that reduction may have been the reticence of some people to take holidays and go to the beach for economic reasons," Burgess said. "We noticed similar declines during the recession that followed the events of 2001, despite the fact that human populations continued to rise."

Shark attacks basically correlate with the number of people in the water. The more people go to the beach, the more they are in the shark's home, the offshore waters, and the more attacks on humans.

In recent years, vacationing tourists have been attacked off beaches in remote parts of the globe, such as Cocos Island in the Indian Ocean, where none were reported in the past, he said.

There were four fatal attacks last year — an average number — compared with only one in 2007, which marked a two-decade low. Two of the deaths were in Mexico, one was in Australia and one was in the United States.

The number of shark attacks in the United States, which typically makes up about two-thirds of the total worldwide, dropped from 50 in 2007 to 41 in 2008, Burgess said. Thirty-two of those attacks were in Florida — the same number as the previous year — followed by North Carolina and South Carolina, with three each; Hawaii had two; and California, one.

Florida, with its warm waters, has more sharks, including black tip sharks and spinner sharks, species not found in lower temperatures, Burgess said.

"A lot less attacks occur off Long Island, New York, than Florida simply because there are fewer sharks up there," he said.

Within Florida, Volusia County continued its dubious distinction as the world’s shark bite capital with 22 incidents, its highest yearly total since 2001, Burgess said.

As in past years, surfers accounted for most of the world’s attacks — 57 percent — followed by swimmers and waders, 36 percent; and divers, 8 percent, he said. These numbers are rounded up, which is why they total more than 100 percent.

"Surfers are the heavy favorites largely because the splashing of arms and particularly the kicking of feet at the water's surface where visibility is poor is provocative to sharks," Burgess said. "They result in what we think are cases of mistaken identity, where the shark interprets the irregular splashing to be activities of its normal prey."

Swimmers and waders are the group most likely to be affected by economic hardship, Burgess said. "These are sort of the average folks that go to the water for recreation, lie on the beach, work on their suntan and take their kids in the surf for a swim," he said. "I would expect their numbers to decline in 2009."

Over the long term, though, Burgess expects shark attacks to rise because of a gradual upswing from one decade to the next. "We’ve already surpassed the numbers of attacks in the previous 10-year period," he said, "so we know this decade will be higher than the last."