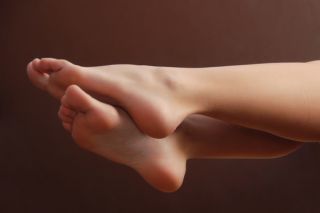 An Arkansas man identified as the "Toe Suck Fairy" was arrested Monday (Sept. 26) following a series of incidents in which he allegedly approached women in stores, commented on their feet and asked to suck their toes. According to Reuters, the culprit, Michael Robert Wyatt, 50, previously served a prison sentence for similar shenanigans. Last time, he even pretended to be a podiatrist in order to fondle and suck a woman's toes at a clothing store.

Though criminal cases are rare, foot fetishism itself is surprisingly common. Academic studies on the prevalence and membership of fetish discussion groups have found that feet and foot accessories are the most fetishized of all non-genital body parts and objects. Nearly half of all such fetishes focus on feet, and almost two-thirds of fetishes for objects associated with the body are for shoes and socks. [Can Brain Scans Read People's Minds? ]

Sigmund Freud claimed that people sexualize feet because they resemble penises. Today, a more scientific theory comes from the neuroscientist Vilanayar Ramachandran, director of the Center for Brain and Cognition at the University of California, San Diego.

Ramachandran said he solved the mystery of foot fetishes while studying the brain malfunctions that lead to phantom limb syndrome, a condition where amputees feel as if their missing limbs are still attached to their bodies, and that they can move those limbs. He found that the syndrome resulted when a person's "body image map" the brain's map of the body, in which different body parts are associated with and controlled by different brain regions failed to erase the part of the map that corresponded to the amputated limb.

In the case of some phantom foot patients, Ramachandran found that the amputees' brains didn't just fail to erase the missing foot from their body image map, they accidentally rewired the map in a way that caused the person's phantom foot to become sexy. Phantom foot patients reported feeling sexual pleasure, and even orgasms , in their missing feet.

Long before Ramachandran began his work on phantom limb syndrome, it had been noted that the brain areas associated with genitalia and feet are adjacent to each other in the brain's body image map. But no one else had put 2 and 2 together and realized that foot fetishes could possibly result from cross-wiring in the brain between the foot and the genital parts.

As Ramachandran wrote in "Phantoms in the Brain: Probing the Mysteries of the Human Mind" (Harper, 1999): "Maybe even many of us so-called normal people have a bit of cross-wiring, which would explain why we like to have our toes sucked."