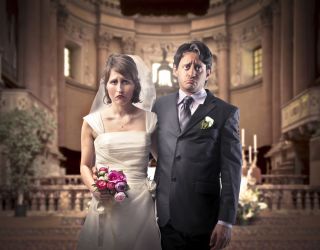 Wedding objections used to be a last-ditch effort to prevent illicit shenanigans.
(Image: © Image via Shutterstock)

Except for melodramatic movie weddings, the minister's instruction that "if anyone can show just cause why this couple cannot lawfully be joined together in matrimony, let them speak now or forever hold their peace" almost always gets omitted from ceremonies these days.

All three wedding officiants contacted for this article said they never utter the line. "It has become obsolete," said Paula Posman, a New York City-based officiant who runs the wedding services company A New York Way to Say I Do.

The tradition has been phased out because no legitimate grounds remain for objecting to a wedding. "You can't object simply because you're in love with the bride. It has to be a legal reason why the couple can't wed," Posman told Life's Little Mysteries. "But today, the legal aspects of a wedding are squared away before the couple gets to the altar, so most officiants just don't ask the question." No point creating an awkward silence for nothing.

But in the past, what sort of objections might have been raised?

In the bygone days of charlatans, swindlers, elopements and bad record-keeping, "speak now or forever hold your peace" was a last-ditch effort to bring to light any illicit shenanigans that would nullify a wedding in the eyes of God. According to the Canon Law of the Catholic Church, impediments to a marriage include either the bride or groom being married already, having made a vow of celibacy, being underage, having been kidnapped or forced to wed, not being baptized, being incapable of having sexual intercourse, or having killed the other's former spouse. There are also stipulations about how closely a couple can be related by blood, marriage and adoption. [5 Strange Courting Rituals from Around the World]

The rules differed across the various faiths, but in almost any Christian country, if someone stormed through the church doors just in the nick of time and swore that the groom had a wife in the next town over, or — worse — was the bride's long-lost brother, these would constitute legitimate objections. According to the Catholic Encyclopedia, the testimony would then have to be delivered under oath, and the priest would be obliged to defer the wedding and investigate the claim.

Today, a marriage's legality is established prior to the ceremony, when a couple obtains a marriage license at their city clerk's office. Modern records (such as social security numbers, birth certificates, marriage and divorce papers) are so thorough that schemes like polygamous marriages rarely slip under the radar, even across borders. To get married in the United States, foreigners often must present a document issued by their country of origin proving they aren't married there.

So, if someone objected at a wedding today, Posman said, "I would pause for a second and say, 'That's not a legal reason,' and continue with the ceremony."