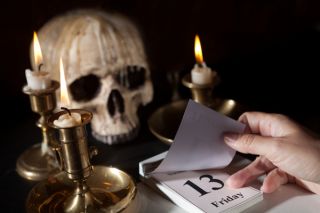 Although Friday the 13th now brings to mind superstitions about bad luck and images of a hockey-mask-wearing, machete-wielding Jason Voorhees, the fear over the day stems from ancient mythological and religious beliefs.

The dread and avoidance of the number 13 can be traced back to ancient Rome, where the number was associated with death, misfortune and destruction. Christian religious beliefs further cemented the number's reputation , stating that Judas, who later betrayed Jesus, was the 13th person at the Last Supper.

Friday the 13's unlucky reputation is twofold; not only is the number 13 considered unlucky , but the day itself was deemed as unfortunate by early Christians because they believed that Christ was crucified on a Friday.

Christians also believed that the number 13 is associated with witchcraft. It was rumored that covens consisted of 13 witches, a number chosen to mock Jesus and the apostles. Furthermore, Christians believed that witches conducted their sinister rituals during full moons, of which there are about 13 in a year.

Whatever the origin, by the late Middle Ages, both Friday and the number 13 were considered bearers of misfortune, with twice as much bad luck when they fell on the same day. Today, the day is dismissed as an old superstition , but its stigma lingers on. According to the Stress Management Center and Phobia Institute in Asheville, N.C., an estimated $800 million to $900 million is lost in business every Friday the 13th due to fears of the doomed day.

Which makes sense. Would you plan on buying a new car, going bungee jumping or getting married on Friday the 13th? We didn't think so.